The Illustrated Monk: Brother Andre Can’t Leave His Tattoos Behind But Can Pursue Sanctity 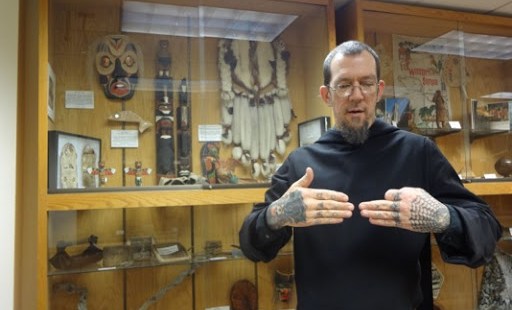 “Hold Fast,” reads the tattoo on the knuckles of Brother André Love, OSB. It’s one of the few tattoos that marks a change of heart in the former Bobby Love, tattoo artist and lapsed Catholic, turned Benedictine monk at Mount Angel Abbey, St. Benedict, Oregon.

“My whole body is tattooed,” he said.

There’s no hiding a past so fully illustrated beneath and beyond his black flowing Benedictine habit. Many of his tattoos speak of a past punctuated with anger, separation, and pain. The later ones, including “Hold Fast,” the heart on his palm, the alpha and the omega, came in the early 2000s, as he began turning a new leaf following a moment of epiphany.

His past life of drugs, alcohol, and punk rock, along with his present life of ora et labora, Gregorian chant, and writing icons has clearly been serving as an eloquent witness to the God of surprises.

“‘Who’s this monk that has the tattoos? What’s his story? people ask,’ ” Father Odo Recker, OSB, Mount Angel Abbey’s vocations director, remarked.  “He’s a good monk, very hardworking, very faithful. He was well on his way by the time he came here. His application to the monastery simply authenticated his desire for God and his ability to enter and live in a monastic context.”

Love first became acquainted with the 132-year-old abbey after a friend asked him to do a chest tattoo of the Jerusalem cross, embroidered on the cloth covering the abbey church’s tabernacle. Love visited the abbey, looked at the embroidered cross, and learned about an upcoming vocations discernment retreat.

By then, Love had returned to the Catholic Church after 25 years of absence. Reared Catholic “without a full understanding of what it meant,” Love dropped out and explored other religions. “I had a fear of religion and saw religion as more of a hindrance than a help,” he said.

He hit rock bottom before realizing that he needed to give the Church a second look. Love confessed about getting “into a whole lot of trouble” soon after moving back to Oregon from Texas in 2006:  “I lost my truck, my license, and my savings.”

A moment of epiphany came while he was sitting on a bus, looking out the window, and seeing a frail, elderly woman carrying a heavy duffel bag. The woman had fallen in that moment. “I heard an internal voice that said, ‘That’s you.’ I realized that I was trying to carry a whole lot of baggage on my own, and that I needed the sacraments.  It was time to stop debating doctrine and to go back to what I knew,” Love said.

He signed up for the Rite of Christian Initiation for Adults (RCIA) at St. Joseph Church in Salem, Oregon in 2006: “Through RCIA, I was able to look at tradition and lineage, and was able to reason and understand as an adult.”

In the spring of 2007, Love received the Sacrament of Confirmation and had done a full confession of 25 years. He recalled crying like a baby upon receiving the Holy Eucharist. “I felt an overwhelming sense of God’s presence in my life,” he said. Love soon quit tattooing for good.

Attending church with his tattoos showing beyond long-sleeved shirts posed some challenges. At the time, Love also wore earrings and his hair in dreadlocks. “Little old ladies would grab their purses and slide away from me. Or the greeter wouldn’t shake my hand. Or someone would ask, ‘Are you even Catholic?’” he said, smiling.

The long sleeves concealed arms that were tattooed solid black early on in his conversion:  “I had full sleeves that I had done from the time I was 17 to the time I was 31. I was really an angry person. When my heart had changed and I wasn’t feeling that anger anymore, I realized that I was speaking it in my tattoos, and had people assume something about me that was no longer true.”