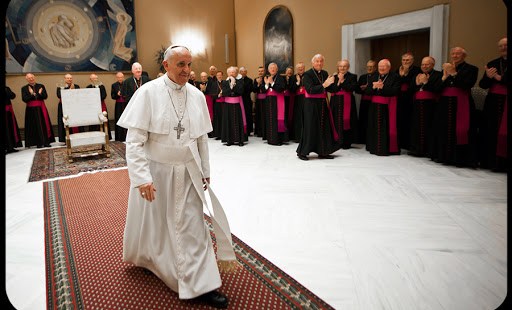 Controversial issues included in list of questions to be sent to bishops, laity

How does the Catholic Church organize ways to inspire and help people to live out a loving and fruitful family life in accord with God’s design, especially with over one billion Catholics in the world?

One way she does this is by gathering Catholic bishops from around the world to meet at the Vatican and discuss ways to renew family life in keeping with the Gospel, and to confront real problems facing families in the modern world.

Pope Francis did just that last October. He convened what is called an “Extraordinary General Assembly of the Synod of Bishops” at the Vatican to confront the host of challenges that families face today.

For anyone who may be wondering — and it’s no wonder than many people would — a Synod of Bishops, in the Roman Catholic Church, is “a group of bishops who have been chosen from different regions of the world and meet together at fixed times to foster closer unity between the Roman Pontiff and bishops, to assist the Roman Pontiff with their counsel in the preservation and growth of faith and morals and in the observance and strengthening of ecclesiastical discipline, and to consider questions pertaining to the activity of the Church in the world” (Code of Canon Law, can. 342).

The Extraordinary Assembly of the Synod of Bishops that met last October came together to discuss matters that directly pertain to the good of the universal Church regarding the family. The meeting was intended to prepare for an Ordinary General Assembly on the family, scheduled for October 2015 in the Vatican, to which a larger number of bishops from across the globe will be invited.

It is customary for several documents to be published throughout the course of a Synod of Bishops. At the conclusion of the October 2014 Extraordinary Synod, a final report aimed at presenting an overview of the matters the bishops and various experts discussed was published. The bishops then voted on each paragraph, one by one, contained in the document.

Some paragraphs received the two-thirds majority needed for approval, and others did not. In the past, those paragraphs that had received the two-thirds majority needed to gain the synod’s approval (consensus) were removed from the document. In the case of the final report at the October meeting, Pope Francis decided to leave those paragraphs in which had not been accepted, and to incorporate a record of how the voting went on each paragraph. This procedure highlighted the provisional nature of the document — its role as a stage on the journey to final conclusions.

The next step in the process leading up to next year’s October Synod is the sending of a preparatory document, containing the final report, to bishops’ conferences and local Churches around the world for further reflection and study.

The Secretariat of the Synod of Bishops (those appointed to organize the Synod, the translation of documents, etc.) also decided to include a list of 61 questions in order to facilitate further study and reflection on the issues raised at the Extraordinary Assembly in October.

On Wednesday, the Secretariat of the Synod of Bishops issued an official English translation of this preparatory document. The document, called the Lineamenta (which means "outline"), included the final report of the Synod and a series of 61 questions, aimed at facilitating study and reflection on the document by the hierarchy and faithful over the coming year.

Aleteia will be publishing several of the questions for reflection formulated by the Secretariat over the coming days, as well as providing links to the pertinent documents.

Today we begin with the hot-button issues. The primary intention of the Synod is to promote the Catholic Christian vision of the family, to help families live more fully the vocation to which they have been called, and to support them in the struggles they face. At the October Synod several hot-button issues related to this process emerged: among these were 1) divorced and “remarried” Catholics receiving Communion, 2) the pastoral care of persons with homosexual tendencies, and 3) issues regarding life.