Entertaining if Not Entirely Faithful “Hobbit: The Battle of Five Armies” 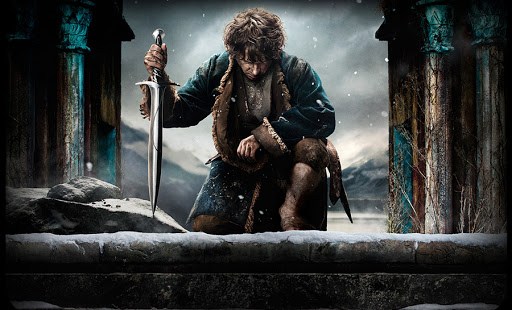 Hobbit series lacks the depth of Lord of the Rings

Before we start, I’d like to ask if there’s anyone out there who still believes these movies are supposed to be faithful adaptations of J. R. R. Tolkien’s beloved novel? Just raise your hand. Yes, you sir, there in the back. If that’s what you truly believe then, for your own mental wellbeing, I’d respectfully ask that you leave the room while we discuss The Hobbit: The Battle of the Five Armies. You’ll thank me for it later.

He’s gone? Good. Now the rest of us can talk about the conclusion to Peter Jackson’s mega-million dollar work of fan-fiction without having to put any Tolkien purists on a death watch. You see, even though I understand the anguish of such folks, for those like myself who have been willing to overlook Jackson’s elaborations on the written word and approach the Hobbit films as basic entertainment, the trilogy has been fairly enjoyable. Did I necessarily need a barely mentioned character from The Simarillion turned into a major antagonist or a goofy romance between a dwarf and an elf? No, but these things didn’t ruin the movies for me either.

And that’s a good thing, because The Hobbit: The Battle of the Five Armies is only marginally better than the first two installments when it comes to tinkering with Tolkien’s world. I mean, come on, giant were-worms straight out of Dune? Really? Such things seem quite distant from Tolkien. And yet, as part of Peter Jackson’s middle-earth LARPing, they’re really not that bad.

Overall, The Hobbit: The Battle of the Five Armies is a fine conclusion to the series and a bit of a step-up from the first two movies. It begins right where the last film ended, with the great wyrm Smaug headed towards Laketown to rain down fiery vengeance for an imagined slight. Once again, Benedict Cumberbatch is in fine form as the voice of the dragon, full of arrogance and overconfidence as he taunts the doomed village.

Yeah, it’s a bit weird having the desolation of Laketown by Smaug occur at the beginning of this movie rather than at the end of the last one where it would have made more sense (what with it being called The Desolation of Smaug and all), but thematically it does set a suitably dark tone for this film. Like the final chapters of Tolkien’s Hobbit, The Battle of the Five Armies is a much more somber outing than what has come before.

This quickly becomes evident as Thorin, having now secured his position as king under the mountain, quickly falls victim to the same “dragon sickness” which had previously possessed Smaug. His descent into madness is wonderfully captured in a bizarre hallucinatory sequence in which the Dwarven leader is ultimately swallowed up by a lake of gold. For those who are familiar with Jackson’s pre-Lord of the Rings filmography, the weirdness of the scene is a nice throwback to some of the director’s more out-there work.

Having promised the people of Laketown to share a portion of the near limitless hoard of treasure at his disposal, the sickened Thorin now refuses to part with a single coin. In this, at least, the movie sticks closely to Tolkien and the Catholic heart at the root of his works. The dragon sickness which descends upon Thorin is nothing less than the sin of avarice warned against by the Church when she proclaims, "He who loves money never has money enough." This disordered desire can exceed the limits of reason and drive a person to covet unjustly what is owed to another. Such is the sin that blackens Thorin’s heart and sets in motion the events which follow.

Well, most of the events anyway. There’s still the little matter of Gandalf being imprisoned at Dol Guldur to be dealt with. In a scene not found in any of Tolkien’s writings, the members of the White Council mount a rescue effort to retrieve Gandalf from the clutches of the newly awakened Nazgûl. Is it a necessary addition to the story? Nope, but just watch Christopher Lee’s Sauron go into full battle wizard mode and try to tell me it’s not a welcome side trip. I won’t believe you if you do.