Photo journal of the rebirth of a church

It is a sweet parish, in the whitewashed Spanish California mission style, with a well-loved rose garden fronting the rectory. As you step outside, you’re likely to see a young Hispanic woman pushing a baby carriage; she makes the Sign of the Cross as she traverses the church’s threshold.

Holy Innocents Church is located smack dab in the depressed Long Beach neighborhood made famous by the rapper “Snoop Dogg.” Father Peter Irving has been the pastor here since 2006. Before that, he was pastor of SS. Peter and Paul Church in Wilmington, CA, where he was involved in an extensive restoration of that exquisitely beautiful Romanesqu-style church.

Battling a plan that would have sold the little church and a neighborhood that initially couldn’t care less, in the last eight years Father and his parishioners have bravely bucked the tide and heroically restored Holy Innocents. In this candid interview with REGINA Magazine, Father Irving shares the story of the barrio church that refused to die – and the ripple effects emanating from Holy Innocents today. 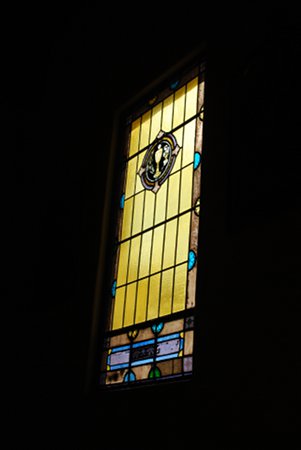 Venerable Mother Maria Luisa Josefa of the Most Blessed Sacrament, foundress of the Carmelite Sisters of the Most Sacred Heart, was a parishioner of Holy Innocents — a refugee from the bloody persecution of Catholics in Mexico. She attended daily Mass and taught catechism. 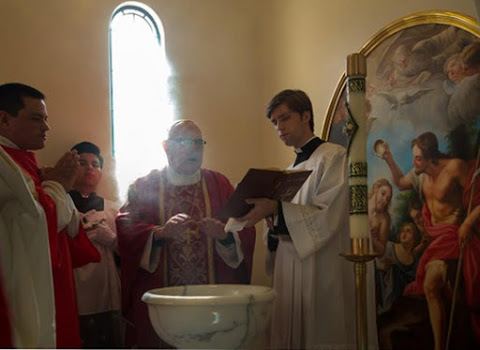 Cardinal William Levada, a Long Beach native was baptized in our church and spent the first 11 years of his life here. He has faithfully served the Church and most recently worked alongside Pope Emeritus Benedict XVI as Prefect of the Sacred Congregation of the Doctrine of the Faith. 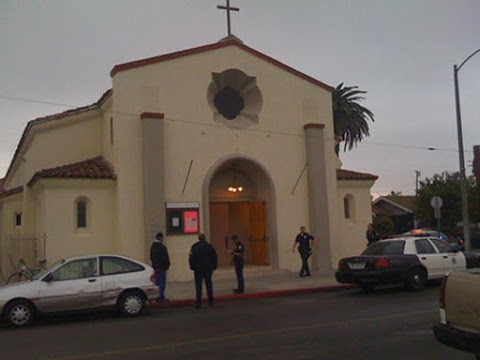 On my first visit to the parish rectory, I saw a drug deal go down just a few feet from me. I always dress as a priest; the dealer and customer saw me as plainly as I saw them but they were completely unabashed. All my priesthood I have served in parishes of this type where, unfortunately, this kind of activity is a part of daily life. 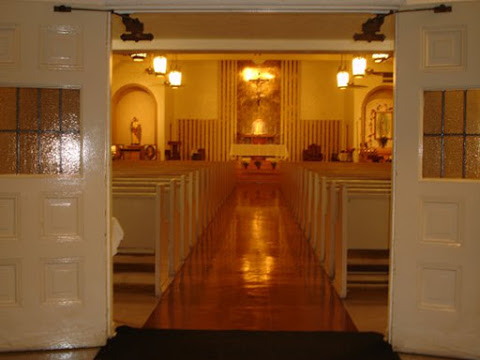 My first masses at Holy Innocents were on a sweltering July 1-2 weekend in 2006. The number of Mass-goers was very low; no more than 35 at the Sunday English Mass and some more at Spanish Mass. But the little church was nowhere near full.

Why was this, Father?

These low numbers did not really surprise me. To be honest, Holy Innocents, at the time, was not a very welcoming place. Everything, inside and out, was ugly, dirty and dilapidated. It is difficult for me to describe in words just how shameful the conditions were, but I will make an attempt.

The rectory was in shambles and became temporarily uninhabitable on account of an infestation of bird mites. I recall offering Mass and being distracted by the incessant cooing of pigeons. For decades, pigeons literally ruled the roost at Holy Innocents, nesting in the attic above the altar boys’ sacristy, and leaving in their wake thick cakes of excrement. This unhealthful residue brought on  the infestation of bird mites and also produced a distinctly pungent odor. 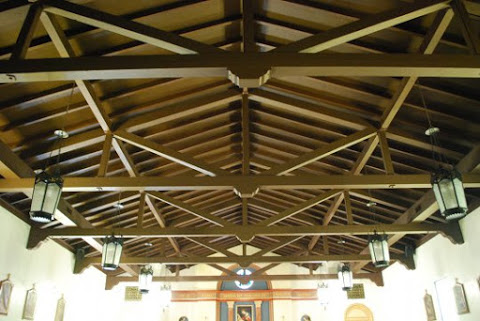 Because the church was not insulated, in the long, warmer season in Southern California the church was hot and smelly. During the shorter winter season the church could be quite cold — and all the while that unpleasant odor was always in the air. 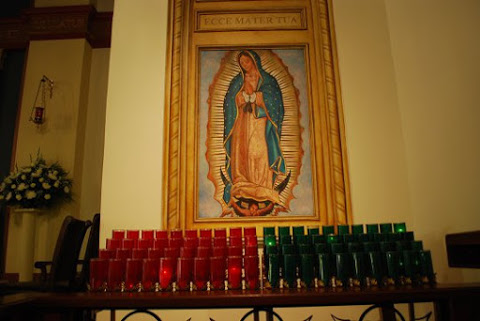 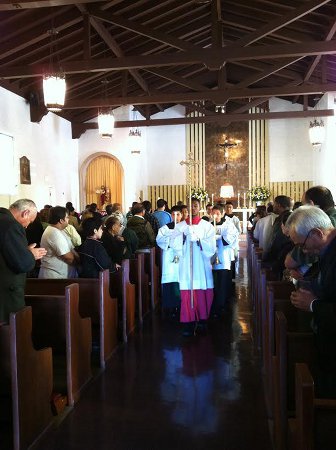 I was convinced of two things: First, I would not be the pastor who would stand up one day  to tell my parishioners that the Archdiocese had sold their neighborhood church. 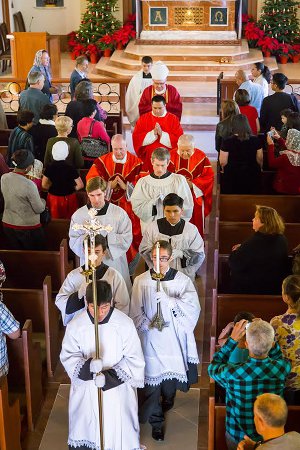 Second with the help of God, Holy Innocents church could be turned into a beautiful place for the glory of God and the salvation of many souls.

Was the church always like this?
No. The original interior design was simple but decent — a Gothic-style altar attached to the wall, with two marble statues of adoring angels flanking it, a communion rail, side altars to Our Lady and the Sacred Heart, and two smaller statues of St. Therese and St. Anthony.