Seven Rules for Being Kind to Waiters 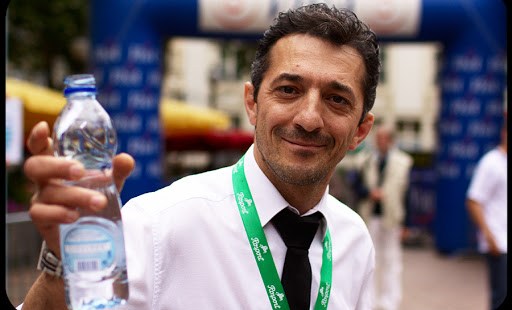 They make room at the inn for you, after all

The poor innkeeper in Bethlehem earned a permanent bad reputation for turning away a heavily pregnant woman at the end of a long trip. He could not have known as he got up that morning that people would be speaking badly of him for 2,000 years — even though, as far as we know, he may have been a very kind man who really didn’t have room. The writer writing on Christmas Eve is expected to say something profound about Christmas, Jesus, the Incarnation, Mary, or maybe even Joseph or the shepherds. The writer writing on Christmas Eve 2014 is also billions of words behind everyone else who’s written on the subject.

So no profound reflection on Christmas from me. But I will take the chance to say something about the way we treat the people who make our religious work possible. I mean those over whom we have power, if only as the customer. (Businesses tend not to keep employees who talk back to jerks.) In particular, waiters, because most of us deal with hundreds more waiters than we do with innkeepers.

Customers can treat waiters and fast food clerks very badly, sometimes amazingly, jaw-droppingly, did-you-see-that badly. Some of it’s just inconsiderateness or selfishness, the failure or refusal to make the small effort to see how things from their point of view, but some of it’s a cowardly assault on the defenseless. Here is a waitress’s response.

Our eldest son worked for a couple years in high school and then summers after at a sandwich shop in an affluent, boutiquely little town, and dealt with obnoxious people every day. They seemed to feel that the few dollars they paid for their sandwich also paid for the right to abuse the staff. If they ordered the wrong thing, for example, the workers were at fault for not reading their minds.

One summer a young woman working there became a particular target, perhaps because she was petite and polite, with people sometimes asking her how stupid she could be. Her co-workers at the cash register end of the line enjoyed telling them, “You know, she’s a classics major at Harvard. She sight-reads ancient Greek and Latin.” My son told me that the abusive customers were not always suitably abashed.

The laborer, as Jesus and then St. Paul said, deserves his wages. For those who benefit from their services, those wages include more than what they’re paid and what we add with our tips. Those wages include courtesy and the effort to see things from their point of view. Here are my personal rules for rewarding waiters. The model can be adapted for other occupations, like inn keepers.

1A) Tip by time as well as the price of your meal. If you’ve taken up a table for longer than the usual customer, add what the waiter would have gotten from the customers you displaced. If you don’t want to do that, don’t stay that long.

1B) Tip by what would have been the total cost when you order a special, like a two for one wings special at the pub. The waiter shouldn’t suffer because the restaurant is drawing in customers with a good deal.

2) Ask for everything you want when you order. When you want something else, like more water, say “When you have a chance” and mean it.

3) If you forgot something, wait till the waiter comes back to ask for it. Don’t wave the poor guy down as he’s trying to serve others whose turn for attention has come. And only ask once, even if you then realize you forgot something else, unless the restaurant is half empty.

4) Pay attention to the rest of the restaurant and if it’s crowded or full of demanding people give your waiter a break. You don’t need another water or more ketchup that much and you certainly don’t need it right away.