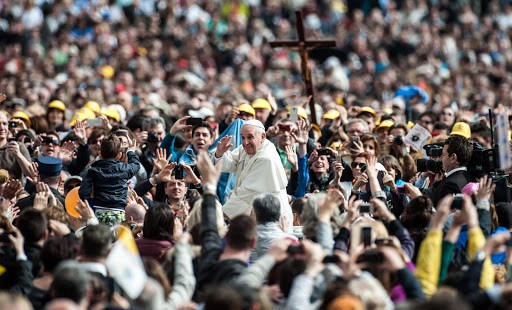 © MASSIMILIANO MIGLIORATO/CPP
March 19, 2014: Pope Francis waves as he leaves at the end of the weekly general audience in St. Peter's Sq. at the Vatican.
Share
Print
Diane Montagna - published on 12/28/14

Slight drop in participation from 2013

A total of 5.9 million faithful attended papal events in Vatican City during the past year, the Vatican announced today.

The figure, released by the prefecture of the papal household, is a drop from 6.6 million during Francis’ first nine and half months as pontiff in 2013.

The statistics show that almost 1.2 million attended Pope Francis’ 43 weekly general audiences held this year, 567,100 were present at his special audiences, just over 1.1 million participated in papal liturgies, and 3 million came to see the Pope recite the Sunday “Angelus” or the “Regina Coeli”.

The numbers are approximate and based on tickets issued or estimated crowd sizes.

From his election in March last year until the end of December 2013, Pope Francis attracted 1.5 million to 30 general audiences and 2.3 million participated in papal liturgies.