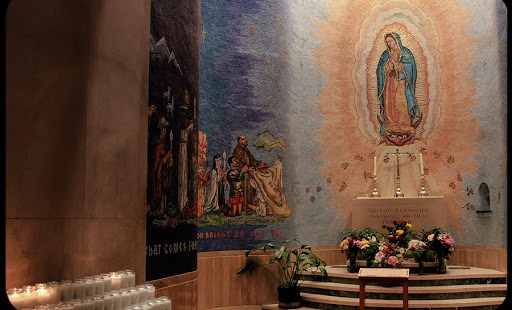 Mary draws us to conversion through prayer and penance

Last year on Thursday, December 12, in the midst of final exams, a number of us student brothers took a Study Break Pilgrimage to visit the Chapel of Our Lady of Guadalupe across the street at the Basilica of the National Shrine of the Immaculate Conception. On that clear and chilly afternoon, we prayed the rosary and sang the Salve Regina, resting a bit before returning to study some more.

Albino Luciani – who was to become Pope John Paul I – notes in a 1977 letter that Marian shrines are living centers of piety and part of the geography of our lives as Catholics, with literally thousands of them all around the world. The four major international Marian shrines draw especially large crowds of pilgrims: Lourdes, Fatima, Aparecida (Brazil), and Guadalupe. Some of the shrines are large, like Our Lady of Czestochowa in Poland, and others are small, like the statues and paintings in our parish churches.

Luciani regularly visited the Shrine of Pietralba in Northern Italy, and as Patriarch of Venice, he joined in annual pilgrimages to different Marian shrines around Italy and Europe, including Lourdes and Fatima. Quoting St. Thomas Aquinas and Pope St. John XXIII, Luciani notes that the Marian visions do not consist in any revelation of new doctrine, but provide guidance for living our lives. The message of Mary is always one of prayer and penance, which lead to conversion of heart, bringing us closer to Christ.

Luciani reminds us that all of these Marian Shrines help us to pray. As little sanctuaries, we can rest the burdens and cares of our souls there, if even just for a few minutes.  Shrines, he writes, are

calling [us] to eternity, waiting for us. Rising usually out of town, we reach them with a journey, and abandon for a short while the house and the daily affairs, arriving at them as on a spiritual island, a piece of [our] anticipated future life.

Marian pilgrimages, therefore, are not about visions or dramatic supernatural appearances. We may travel to the places of visions, but we do not come to Mary for the sensory experiences. We come to find Christ, and Mary always points the way to her Son. In the Gospels we see that Mary keeps and ponders all the words and actions of Jesus in her heart, even those she does not yet understand (Luke 2), and teaches us to do whatever Christ tells us (John 2).  Because of Mary’s example, all the Marian shrines remind us of the call to prayer and penance.  For this reason, Luciani concludes in his letter that Marian Shrines “are most useful and do great good.”

Let us take some time this day to go visit Our Mother, journeying a little, so that resting our burdens even if just for a few minutes, we may remember our heavenly homeland and pray for the strength and conversion necessary to reach that final goal.

Br. Nicholas Schneider entered the Order of Preachers in 2012. He is a graduate of Youngstown State University and completed an M.A. in Russian History at Georgetown University. This article originally appeared in the blog Dominicana, a publication of the Dominican Studium of the St. Joseph Province of the Order of Preachers. It is republished here with kind permission.

Editor’s note:  A list of Marian shrines in the United States can be found here.  Shrines around the world are listed at here.