The New Traditionalist Church: Fostering a Balance of the Past and the Present 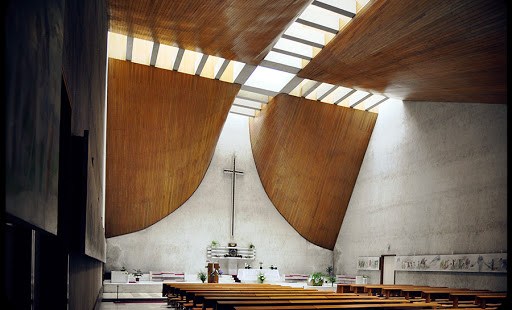 When I was a young man, a teenager really, I did the usual crazy stuff of the early ’70s: had long hair, wore bell bottoms, wide ties, and crazy plaids, kept at least the top three buttons of my shirt open, and, of course, listened to rock-n-roll.

But through it all I had this love for older things. I think it had something to do with my grandmother, Nana, whom I loved with great affection.

Often she lamented the loss of the old things and the old ways. She missed the Latin Mass; she missed when manners were better, when people remembered how to dress well, when things were more certain, when (as Archie and Edith sang at the beginning of All in the Family) “girls were girls and men were men.” She also missed when things were built to last and plastic was all but unknown.

Somehow her love for older things and older ways took hold in me, even as I indulged in the trappings of the silly seventies. My parents’ generation (born in the late ’20s and ’30s) and even more so the generation born after the War were somewhat iconoclastic generations. The motto seemed to be “Out with the old and in with the new … new and improved.”

I remember my mother often wanting to get rid of some old thing. I frequently volunteered to remove it and would then proceed to hide it in the attic instead. Old silver, Tiffany lamps, statues, and trunks began to fill our attic. In addition, I loved old buildings and hated the glass boxes that were being built in the ’70s. I remembered the old churches of my childhood in Chicago that “looked like churches” and lamented the “ugly modern church” of my ’70s suburb. And even though I liked rock music, I couldn’t stand the “hippie music” of the ’60s that predominated in the ’70s parishes: “Kumbaya,” “Sons of God”. Such dreadful lyrics, distributed to the congregation on mimeographed sheets: “… Gather around the table of the Lord. Eat his Body! Drink his blood! And we’ll sing a song of love, Allelu, Allelu, Allelu, Allelu-i-a!”

My grandmother often told me how much she missed the beautiful old songs, the incense, the veils, the priests in cassocks, and so many other things. Somehow she had my ear. I was sympathetic, hiding antiques cast aside from both my parents’ home and from the Church, too. I looked for the day when sanity would return and such cast-offs would once again be valued.

And that day has largely come. Much of the iconoclasm of the ’50s through the mid-’80s has given way and many older things are once again appreciated. As I brought some things down out of the attic in the early ’90s, my mother, strangely, appreciated them again. Other family members took some of the silver, etc. My Chalice was actually an old cast-off that I had restored. Statues have begun to return to churches; some of the old hymns have returned and the Latin Mass, once relegated to the cellar, has been dusted off and is now appreciated again by many, mostly younger, Catholics. I have also had the good fortune of being able to help restore two old churches to their former glory and to undo some of the iconoclasm from which they suffered. I even wear my cassock quite often.

For the record, I do not mind some of the more modern churches; some of them have a handsome simplicity. But nothing irks me more than to see a beautiful older church “renovated” to look like 1985, all whitewashed and stripped bare. Thankfully, I think that terrible era is largely ending.

But we have been through a time of it in the Church to be sure. Perhaps some things had to go “into the attic” for a time in order that they could be taken down again and appreciated anew. But whatever the reasons for the iconoclasm, especially of the 1960s, I sense we are now recovering a balance, a balance that does not reject the new but still appreciates the old, a balance that nods to a hermeneutic of continuity (of which the Pope speaks) rather than a rupture and radical discontinuity with the past, a balance of which Jesus says, Therefore every scribe who has become a disciple of the kingdom of heaven is like a head of a household, who brings out of his treasure things new and old (Matt 13:52).

Many look back and wonder at the great rupture and cultural tsunami we have endured in the West. We wonder how and why. There are, of course, countless reasons, but I would like to single out just one: forgetfulness.

Traditions are established and endure for a reason. Fundamentally, they simplify life by giving structure, boundaries, and expectations. People know more easily how to navigate in the realm of tradition. But one sign that a tradition is in danger is when people come to forget its purpose, when people forget where it came from or why it is observed, when people forget what it means or symbolizes.

I wonder what would happen if I were to get into a time machine and go back to 1940 in this parish and ask people some questions: Why do women wear hats and veils while men do not cover their heads? Why do we kneel to receive Communion? Why is the Mass in Latin? Why does the priest face toward the altar? Why are all these things done this way? I suspect I would get answers like “I dunno, we just do it that way. Why don’t you ask the priest?”

In other words, I wonder if the first stage of losing a tradition is when it no longer makes conscious sense to people; when it is no longer clear to them why we do what we do; when all they can say about it is “That’s just what we do.”

At some point when we are dealing with traditions, we run the risk that they become wooden and rote, and we start sifting through the ashes of an old fire that has largely gone out. Unless we fan into flames the gifts of God’s love (cf 2 Tim 1:6), our love and appreciation of these things grows cold and their beauty fades. And then when someone asks, “What’s this thing?” we reply, “What, that old thing?” And thus the suggestion to “get rid of it” receives a cursory nod and the response, “Sure, that’s fine; get rid of it.”

But the process begins with forgetfulness. And forgetfulness leads to a lack of understanding, which then gives way to a lack of appreciation. All this culminates in an almost gleeful dismissal of the old things and the now-tarnished traditions that once sustained and framed our lives.

To be sure, some things need to fall away. Perhaps there is a time and place to “lose” things for a while, only to rediscover them later. But what we have experienced in the last 60 years has been more than this sort of natural process. It has been a rupture, a radical discontinuity that has shaken many of our foundations, Church and family especially.

Therefore we do well to “remember” many of our traditions. The word “remember” suggests a process of putting the pieces back together again, a process of collecting some precious things that have been severed from the body and making them once again “members” of the Body, the Church, and of our families. Remembering many of our lost traditions, even as we establish some new ones, is an important way of ensuring continuity with our past heritage and members.

Tradition is the “democracy of the dead” wherein our ancestors get a say in what we do. Tradition is a way to “remember” the Church, to honor the ways and practices of the ancients that my grandmother recalled with fondness and a sense of loss. And it was a loss, but a loss I pray we are beginning to remedy, as we remember the best of the past and recover our traditions.

I thought of all of this as I watched this video from Fiddler on the Roof. This was written at a time when the sweeping changes of the last 60 years were already underway. And this song “Tradition!” while it tips a hat to tradition, ultimately ridicules it by implying that tradition is the kind of thing that essentially keeps men in charge, women down, and forces children into arranged and unhappy marriages.

At a key moment in the song, Tevye is describing the tradition of the prayer shawl and says, “You may ask, ‘How did this tradition get started?’ I’ll tell you.” And then after a pause he says, “I don’t know, but it’s a tradition!” The first sign that a tradition is in trouble is forgetfulness.

But the musical (written in 1964) pretty well captures the iconoclastic attitudes emerging at the time that were cynical of tradition in a general sort of way. Despite that cynicism, Tevye rightly notes what we have come to discover only too well:

“Without our traditions our lives would be as shaky as a Fiddler on the Roof.”

Msgr. Charles Pope
is the pastor of Holy Comforter-St. Cyprian in Washington, DC. He attended Mount Saint Mary’s Seminary and holds Masters degrees in Divinity and in Moral Theology.
He was ordained in 1989 and named a Monsignor in 2005. He has conducted a weekly Bible Study in Congress and in the White House, for two and four years, respectively.