I Was In Prison and You Visited Me 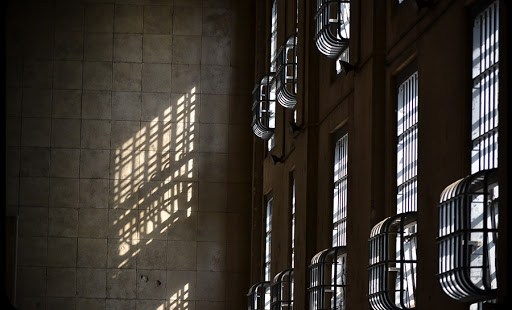 Alexandria, Virginia’s William G. Truesdale Detention Center — known to local criminals as “the Hilton of Northern Virginia jails” — is camouflaged among the red brick of its mixed residential and commercial Old Town neighbors. But once you see it, the mammoth complex is impossible not to register.

Built in 1987, the imposing facility known as the Alexandria jail, houses about 400 inmates. These men and women face a range of local, state and federal charges. Yet, regardless of past transgressions, all inmates on good behavior have the option of attending Christian services and participating in Bible study. Mass, as with all religious services at the jail, is voluntary, but inmates must be cleared to attend. Those who do not come sit in their cell or home unit.

Strict regulations mean that getting clearance to visit the jail for any reason is a tricky task. Even as a journalist on assignment, the process is complicated. In this case, the hope was to witness Arlington Bishop Paul S. Loverde celebrating Mass Dec. 17, in observance of the third week of Advent.

Once cleared, navigating the jail requires at least one escort and means braving a series of doors and elevators. At the end of the labyrinth is the blue and green multipurpose room, the site of all religious services, including Mass. It is the same place where the inmates play basketball and gather for large events.

To prepare for the weekly Wednesday Mass, jail staff and Catholic volunteers set up a table, a podium and about 50 plastic chairs too light to injure anyone if hurled. Four more chairs are tucked into corners to serve as confessionals. A blue, black and red banner with a cross and the words “Jesus loves you” in English and Spanish adorns the concrete wall. This banner serves as the cross above the altar.

The program featured a colorful cover, a headshot of the bishop and fully translated text. The last page included the news that Pope Francis condemned the death penalty and life imprisonment — the “hidden death sentence” — when he spoke to a delegation from the International Association of Penal Law Oct. 23, 2014.

The Pope’s quote, typed in bold, read: “It is impossible to imagine that states today cannot make use of another means than capital punishment to defend peoples’ lives from an unjust aggressor.”

As the priests, deacons and volunteers settled into their places, inmates in green jumpsuits trickled into the room. Their sneakers featured Velcro straps but no laces. Every week, female inmates are brought in last and brought out first so as not to attract attention from male inmates. Of the six female inmates who signed up, two attended the Mass.

Bishop Loverde celebrated Mass in English and Spanish to accommodate a bilingual congregation, as is customary at the Alexandria jail.

Deputy Sheriff Valarie Wright was one of the staff members supervising the bishop’s Mass.

“(Religious programming) gives the inmates an outlet,” Wright said. “Some use it for the purpose it was intended. The large majority don’t. Some use it as a means to falsely portray that they’ve morally rehabilitated. But if it’s not in their heart, they’re still coming back here to jail.”

About half of inmates return to jail within a year of being released.

Richard Butler III, 33, one of the inmates who attended the bishop’s Mass, is in jail for a probation violation. Raised a Protestant, he comes to the Catholic Mass every week.

“I attend all Christian services because I believe in one God,” said Butler. “I’ve been trying to learn the rosary, but that’s a lot, so it’s kind of hard.”

Another inmate who attended the Mass, Louis Marelli, 44, who is there on an undisclosed federal charge, was raised Catholic. But until a jail volunteer gave him instructions in 2010, he had never recited the rosary.

“When I was saying the prayers, I was at ease,” Marelli said. “I felt the anxiety start to go away. I felt peaceful and humble.”

Marelli said he also goes to the jail meditation class, reads the Bible and listens to Christian radio.