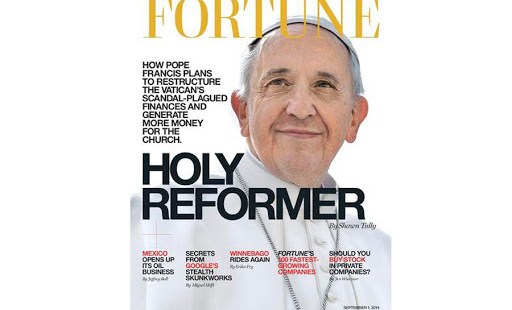 Pope Francis has once again defended himself against accusations of being a Marxist, but this time added a note of concern about how rising inequalities are contributing to a culture of death.

When Pope Francis issued his Apostolic Exhortation Evangelii Gaudium, Rush Limbaugh accused him of being a Marxist.

The offending material in the writing? Unfettered capitalism is "a new tyranny," wrote the Pope, who urged global leaders to fight poverty and growing inequality.

The Pope has responded to such criticism in the past, but in a new interview, he says the Church’s concern for the poor is from the Gospel and is evident in the early centuries of the Church.

“It is not an invention of communism and it must not be turned into an ideology, as has sometimes happened before,” the Pope said in the Sunday edition of the Italian daily La Stampa. “Some may think it a novelty, whilst instead it is a concern that stems from the Gospel and is documented even from the first centuries of Christianity. If I repeated some passages from the homilies of the Church Fathers, in the second or third century, about how we must treat the poor, some would accuse me of giving a Marxist homily. ‘You are not making a gift of what is yours to the poor man, but you are giving him back what is his. You have been appropriating things that are meant to be for the common use of everyone. The earth belongs to everyone, not to the rich.’ These were St. Ambrose’s words, which Pope Paul VI used to state, in Populorum Progressio, that private property does not constitute an absolute and unconditional right for anyone, and that no one is allowed to keep for their exclusive use things superfluous to their needs, when others lack basic necessities.”

He clarified that the Gospel does not condemn the wealthy, but the idolatry of wealth, “the idolatry that makes people indifferent to the call of the poor.”

The Pope conceded that globalization has helped many people rise out of poverty, but it has also "damned many others to starve to death. It is true that global wealth is growing in absolute terms, but inequalities have also grown and new poverty arisen.”

What I have noticed is that this system sustains itself through a culture of waste, which I have already discussed various times. There is the politics, the sociology and even the attitude of waste. When money, instead of man, is at the center of the system, when money becomes an idol, men and women are reduced to simple instruments of a social and economic system, which is characterized, better yet dominated, by profound inequalities. So we discard whatever is not useful to this logic; it is this attitude that discards children and older people, and is now affecting the young. …

I would also like to highlight an aspect of the culture of waste; that which leads people to discard babies through abortion. I am shocked by the low birth rates here in Italy; this is how we lose our link to the future. The culture of waste also leads to a hidden euthanasia of older people, who are abandoned. Instead of being considered as our memory, our link to our own past and a source of wisdom for the present.

The interview was conduced in October as part of a book about the social teaching of the Church under Pope Francis. The book, by Andrea Tornielli, director of the La Stampa’s Vatican Insider,  and the Italian daily’s Vatican beat reporter, Giacomo Galeazzi, is titled Papa Francesco. Questa economia uccide – “Pope Francis: this economy kills,” and is due out tomorrow.