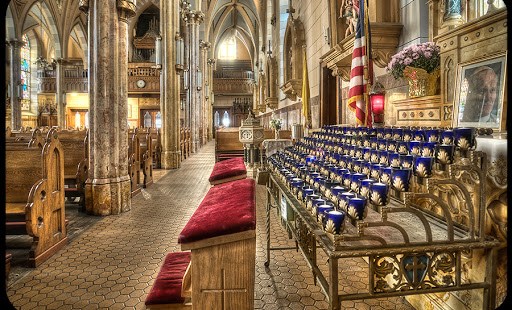 A study of the last wave of Catholic immigrants proves rewarding

In my last post, I pointed to the many parallels that existed between the mass immigration that the United States experiences today, and the previous wave of newcomers that entered the country in the early twentieth century. Studying such parallels, I suggested, is highly instructive for understanding the directions that the U.S. might take in future decades. Nowhere are those analogies more convincing than in the realm of religion.

I lecture frequently on the rise of Global South Christianity, which often follows styles of worship and practice quite different from those in North America or Europe. That story has a special relevance for our own societies because mass immigration brings those diverse traditions along with it. More generally, the arrival of so many millions of people from Latin America, Africa, and Asia cannot fail to reshape American religious life. But what will such a transformation look like? How should Global North churches respond to the social and ethnic revolutions they see in progress all around them? Can new wine really be put into old wineskins?

When I am asked about the long term effects of those immigrant Christians on our churches, I urge questioners to study the development of American Catholicism between the 1880s and 1920s, because that was of course the heritage of most of the millions of new arrivals. Of course the analogies are not perfect, but they are richly informative, and they apply to all contemporary faiths and denominations, not just Catholics.

If you want to understand America’s religious future, then delve deeply into the classic scholars of U.S. Catholic history, such as Jay P. Dolan, Mark S. Massa, John T. McGreevy, Charles R. Morris, Robert Orsi, or James M. O’Toole, and focus on the years of the great immigration, between the 1880s and 1920s. You will read about a society where immigrants participated heavily in their churches, not necessarily because of fervent piety, but because those institutions provided the essential social, cultural and economic framework that allowed displaced communities to survive in a puzzling and often hostile land. This is where they could speak languages from home, find familiar food, where children could be taught, and where young adults would find marriage partners.

So powerful was the pull of religious institutions, in fact, that the move to America often led immigrants to become far more pious and practicing than they had been in their homelands. True in 1915, and true today.

A series of fine local Catholic histories allow us to see these developments in detail. We turn to books by Thomas H. O’Connor, on Boston Catholics (2000); Mary Lethert Wingerd, Claiming The City (2001) on St. Paul, Minn.; to Richard N. Juliani, Priest, Parish, And People (2007), on Philadelphia; or William Issel, Church and State in the City (2012), on San Francisco.

Beyond noting the critical importance of religious institutions then and now, we also trace other parallels in the issues raised by mass immigration. What, for instance, is or should be the relationship between old and new ethnic groups in particular denominations? In that earlier era, we see endemic clashes and debates between old and new believers — usually civil, sometimes not, and sometimes so grave as to detonate schisms and separations.

One recurring grievance was the ethnic split between the hierarchy and the newer generation of clergy and laity. In 1907, for instance, Polish believers became so disenchanted with (mainly) Irish bishops that some created a whole new Polish National Catholic Church. Similar grievances affected Eastern European Catholics who followed the Uniate rite, obedient to Rome. On American soil, though, many Uniate believers abandoned Rome to become full-fledged Orthodox congregations.