Gay and Catholic? One Writer Finds Her Path 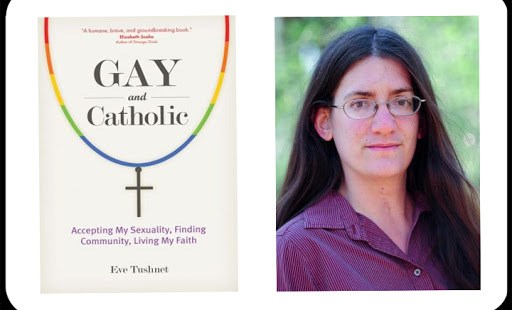 WASHINGTON — It seemed like it would be a weird and a hard evening. Eve Tushnet, a prominent gay Catholic intellectual, arrived only a few minutes before her speech at the Catholic Information Center downtown and sat down alone in a chair in the front of a chapel that doubles as an auditorium. She didn’t talk with anyone.

“At the time I thought I was the only one who was gay and following Church teaching," Tushnet said as she began her talk Tuesday evening. She described her sophomore year at Yale University in 1998, the year she converted from a secular Jewish tradition to Catholicism. "Basically I had two paths: to try really hard and be celibate … and to not date girls. That’s fine, I guess. But it turns out that’s not really easy to build a life around. As my friend Lindsey said, You can’t build a life on a line that’s not even longer than a tweet.”

The audience laughed nervously, but early on their expressions did not put Tushnet at ease. Near the wooden podium she saw a sea of faces staring back at her with pursed lips and blank looks.

Delivering prepared talks makes her feel slightly uncomfortable anyway.  “I’ve always done better on the Q&A part,” Tushnet said later. “And I get out of breath quickly.” When she was a newborn, a blood vessel wrapped around Tushnet’s trachea, a birth defect that proved nearly fatal.  As a result, she wheezes.

Tushnet’s talk was preceded by controversy. On December 19, a conservative Catholic writer and activist criticized Tushnet and a fellow “new homophile,” saying they were narcissistic and disputing their claim that gayness is immutable and a spiritual gift. “They are 95 percent there when it comes to Church teaching but … the last 5 percent is a serious problem on which the New Homophiles need to be engaged,” Austin Ruse wrote in Crisis.

Tushnet is no Andrew Sullivan, a well-known gay Catholic writer who loves the Mass and parts of Church teaching but rejects its sexual mores. Her goal is to find common ground between homosexuality and traditional or orthodox Catholicism. The title of her book is Gay and Catholic. She quoted from St. Aelred of Rievaulx, a 12th-century Trappist monk. Although conservative Catholics like Ross Douthat praise Tushnet, some progressives and conservatives say that reconciling Stonewall and Mother Church is an all-but-impossible task.

Four days after Ruse’s editorial, progressive writer Damon Linker said the article was evidence that “(a)s long as those who hold such starkly anti-gay views wield influence in the Church … (g)ays will be faced with a stark choice: leave the Church for good or somehow make their homosexual desires vanish. Exile or erasure. There is no third alternative. Not even celibacy.”

Father Arne A. Panula, the director of the Catholic Information Center, thought a third alternative might be possible, though. He invited Tushnet to speak after browsing through Gay and Catholic. "How should the Church pastor to people with same-sex desires? It’s something that’s being discussed," said Father Panula, a priest of the Personal Prelature of Opus Dei.

The center’s employees did not skimp on reaching out to Tushnet. No beer or wine was served at her talk, an accommodation to Tushnet’s previous struggles with alcoholism. In the foyer of the center’s main room were 75 paperback copies of her book, sold for $15.95.

Before Tushnet arrived, one man sat on a settee reading a copy of her book, while another read it on a chair. Gregorian chant music filled the air, piped through the overhead speakers. Ten or 15 minutes into her talk, a young female employee emerged from a side door to help Tushnet. The evening’s featured speaker strapped a black microphone to enable the audience to hear her better but forgot to hit a button to turn the thing on.