All Christians Rely on Tradition Rather than Scripture Alone 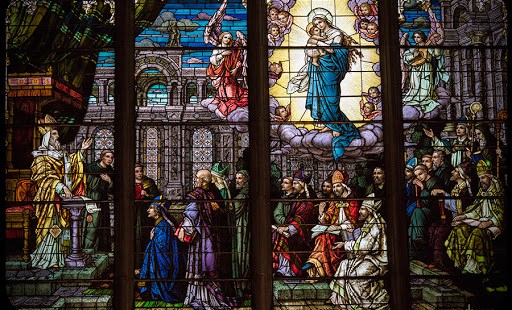 Evangelicals are more Catholic than they think

As a statement about the making of church doctrine, that comment might not sound too startling, and it is quite obvious to Catholic and Orthodox believers. But it does point to a major paradox in the thinking of that numerous and influential section of the world’s Christians who are evangelicals. Surprised, and even shocked, as they might be to hear it, they are in fact far more Catholic than they might ever have thought.

Evangelicals pride themselves on their reliance on Scripture alone, the core Reformation doctrine of sola scriptura. If you look at evangelical debates, the question will soon arise: how do you ground this in scripture? Give me chapter and verse!

But here’s the problem. Evangelicals believe absolutely in core doctrines of faith that cannot be derived simply from scripture, but rather grow out of church tradition. Once you have formulated the belief, you can if you wish cherry-pick Biblical verses to support it, but you would never have reached the position through scripture alone.

The obvious example is the Trinity itself, which evangelicals regard as a fundamental belief for anyone claiming Christian credentials. Yet it is not found in the Bible. The only scriptural support it ever had was the so-called Johannine Comma, an explicitly Trinitarian line in 1 John 5: 7-8, which is consecrated in the text of the King James Bible of 1611. Unfortunately, scholars have known for centuries that those words were inserted much later into the original text, and no serious writer would today cite it as authentic.

Losing the Comma poses no difficulty for anyone believing in the Trinity, which is an idea very deeply rooted indeed in church tradition. The doctrine was certainly held by Christian believers in the second century, especially by Apostolic Fathers such as Ignatius and Justin Martyr. To speak of church tradition does not, of course, mean that such later figures invented doctrines for their own sinister purposes. Rather, as Catholic and Orthodox theologians have always held, the church was, and is guided by the Holy Spirit. But without such a belief in the power of continuing tradition, how can anyone justify the doctrine of the Trinity?

No church tradition, no Trinity.

Scarcely less fundamental for evangelicals is the belief in Christ’s Incarnation. The New Testament certainly allows us to form ideas of Christ’s divinity, and his becoming human. Relying on those Biblical texts, though, gave early believers huge leeway in how they defined the relationship between human and divine. Was Christ literally God walking on earth in human guise? Did divinity descend on Jesus at some moment in his earthly life, presumably at his Baptism, only to leave him at the Crucifixion? Christians argued about these complex doctrines for centuries, and settled them only at the Council of Chalcedon in 451 AD.  In other words, the doctrine was settled by debate within the Church, on the basis of scripture and tradition, but under the guidance of the Spirit.

No church tradition, then, no doctrine of Incarnation.

Protestants have always held the early church in high esteem, and distinguished evangelical scholars publish learned works on the early Fathers. The evangelical press IVP has, for instance, presented a wonderful series of volumes under the title Ancient Christian Commentary on Scripture.  Having said this, evangelicals still balk at using the wisdom of the early Church to establish doctrine.

But suppose they do acknowledge reality, and admit that key doctrines like the Trinity are in fact grounded on the traditions of that early Church. How do they define “early”? Do they see the workings of the Spirit still in action before the Council of Nicea in 325, or might they extend that latitude to the time of Chalcedon in 451, as they must if they are to accept the Incarnation? If they accept the ideas of St. Augustine as authoritative, then that takes us well into the fifth century.