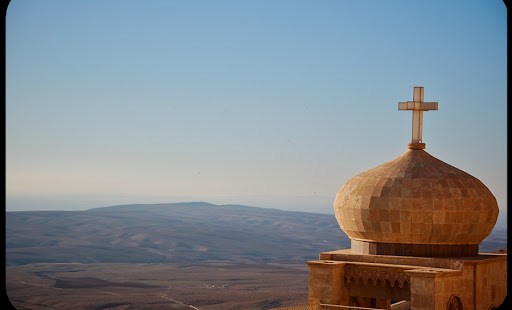 In search of independence and safety, thousands become refugees.

Dahuk/Aleteia – (Aleteia.org/ar) Erbil and Dahuk are among the most important cities in Iraqi Kurdistan. Hundreds of thousands of Christians and others have sought refuge in these cities, escaping the areas that are under ISIS control.

The highway that connects these two cities is filled with surprises. It is extremely narrow and sections of it are rough. Occasionally, the road actually has two lanes where cars and trucks rudely attempt to pass on another.

Vast barren areas suddenly open up into patchy areas of green. Small streams and lakes comingle with broad areas of desert. Located behind the hills a few kilometers off is the city of Mosul, a city that has become increasingly important to ISIS over the past few months.

This road is a microcosm of a society and economy that is in a state of continuous expansion. Unfortunately, it finds itself embroiled in the conflicts and antagonisms that have appeared once again under new pretexts. For instance, it is in open war with Islamic militants and at the same time dealing with rising tensions with the central Iraqi government. Furthermore, they are involved in a tainted religious conflict and left to handle a decade’s old gap between local and central authorities. Meanwhile, in the background Erbil is steadily striving to obtain self-rule.

Checkpoints are scattered along the road between the two cities. Policemen and soldiers guard every important intersection, searching cars, checking identification documents and asking people where they are going. All of this is necessary because of the very real possibility of Islamic militants infiltrating the area.

Speaking with the Kurds, one can feel these tensions. According to them, the Christians are their friends, but the Arab Muslims and foreigners who are displacing and fighting them are enemies.

In a land that has been saturated in blood by Saddam Hussein’s regime, the Christian community is now threatened by Islamists, nationalist and pro-independence movements seeking to be liberated from Baghdad’s yoke. However, jihadists have begun to infiltrate this region by using those espousing the same ideologies in Erbil and among Muslim Kurds.

Most people just want to live their lives in peace and far from the violence and terrorism. In light of this, Peshmerga forces have formed a defensive barrier, which is a wall that divides Iraqi Kurdistan from Mosul and Nineveh where the jihadists are in control.

For now, it appears that the balance of power between the two sides has found equilibrium. However, as was made clear from the events that occurred last summer, this equilibrium is tenuous and may at any moment be demolished under the pressure of internal and external forces. The violence, and at times reconciliation, is often influenced by the foreign interests of countries like the United States, Saudi Arabia, United Arab Emirates, Qatar and Iran.

At any rate, these complications are clearing the way in front of hundreds of thousands of new Christian, Muslim, Yazidi and other refugees who have been forced to leave their homes and personal possessions whenever they have been given a choice between renouncing their religions or death.

This article was translated and originally appeared in the Arabic Aleteia.​