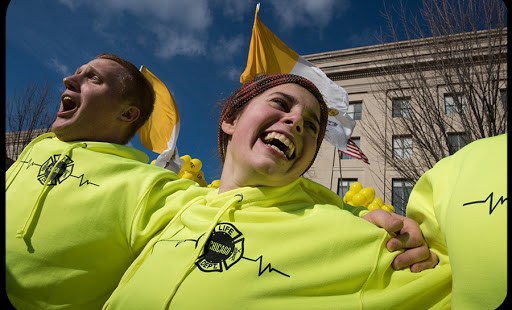 It wasn’t the first time a Pope has sent a tweet across the Atlantic to the annual March for Life, but this morning’s message was welcomed with as much enthusiasm as the first was, a few years ago.

“Every Life is a Gift,” said Pope Francis’ Twitter message Jan. 22, using the hashtag “#marchforlife.” The message went out to over 5.3 million Twitter followers on his English-language account @Pontifex.

As of 3pm Eastern, his English-language tweet had been retweeted some 15,000 times.

Meanwhile, crowds of pro-life advocates amassed on the National Mall for a rally preceding the March for Life. Speakers included pro-life activists and members of Congress, some focusing on the need to protect disabled children.

Republican Congressman Mike Pompeo of Kansas said the large youth contingent is evidence that "the pro-life movement is stronger than ever," and a reminder that "every single life is a gift."

Marking the 42nd anniversary of the 1973 Roe v. Wade Supreme Court decision, which legalized abortion nationwide, protesters held signs with slogans such as, "Defend Life" and "I am a voice for the voiceless" and "Thank God my mom’s pro-life."

In its second annual report examining "The State of Abortion in America," National Right to Life said that abortion figures are still high, in spite of a recent decrease.

"While recent reports show a significant decrease in the annual number of abortions, tragically, nearly 3,000 unborn children are still killed every day in the United States," said Carol Tobias, president of National Right to Life.

Meanwhile, NARAL Pro-choice America posted a message on its Facebook page, saying, "We’re part of the 7 in 10 who support Roe v. Wade because we believe everyone should decide for themselves whether, when, and with whom to have a family."

Many would dispute the statistics the organization cites. Wednesday night, speaking to some 11,000 Catholics gathered in the Basilica of the National Shrine of the Immaculate Conception, Cardinal Sean O’Malley said that myths about America’s pro-choice stance perdure, in spite of recent findings.

"Despite the impression that a solid majority of Americans back legal abortions, the Gallup polls indicate that about the same number of Americans identify as pro-choice as do pro-life, but in fact 58% of Americans oppose all or most abortions," said the cardinal, who is chairman of the U.S. bishops’ Committee on Pro-Life Activities.

Speaking during a Mass to open the National Prayer Vigil for Life, he described three myths persist in the American media and public perception: that abortion is a woman’s issue, that most Americans "are pro-choice, pro-abortion," and that "young people are overwhelmingly in favor of the pro-abortion position."

Polling over the past 20 years, according to the Cardinal, shows "women have consistently been more pro-life than men." In addition, young people "are the most pro-life segment of the American people," he said. Five years ago, the Gallup organization "declared pro-life is the new normal," Cardinal O’Malley said.

As the day wore on, another world leader released a Tweet commemorating the Roe anniversary. This time it was President Barack Obama, and it read "President Obama on the 42nd anniversary of Roe v. Wade #7in10ForRoe." Attached was a jpeg of his annual statement supporting Roe v Wade.

The decision, he said, reaffirmed “a fundamental American value: that government should not intrude in our most private and personal family matters."