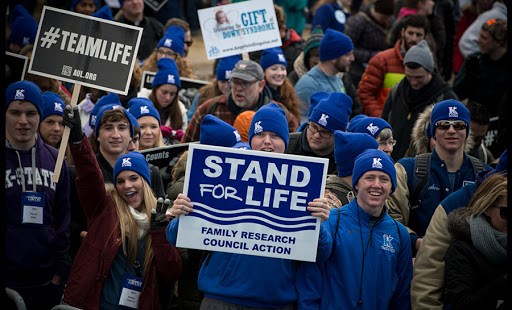 Will the mainstream media ignore its hundreds of thousands?

WASHINGTON — For decades, the annual March for Life here was a one-day blur of drowsy bus rides, jam-packed youth masses, and protest walk from the Washington Monument to the Supreme Court.  But the protest this year has evolved into a four-day extravaganza of professional conferences, board meetings, and large commercial exhibits.

"This is the Super Bowl of the pro-life movement," said activist Larry Cirignano, standing in a sea of pro-life vendors at the 2015 March for Life Conference and Expo at a hotel downtown. "This is where you network and build organizations."

March for Life, the organization that runs the march, is not shy about advertising its growing status. In a 43-page program that an affiliate group handed out Wednesday, the March for Life noted it "has grown and expanded its staff to four full-time staff and one part-time employee."

With a newly professionalized staff, March for Life plans to step up its educational and lobbying efforts year round. In a letter to marchers, President Jeanne Monahan-Mancini noted that the organization will launch March for Life Action, a 501(c)4 organization, later this year. The new group will lobby Congress to approve more anti-abortion laws.

Even with extra staff members, March for Life has fewer employees than pro-life groups such as National Right to Life or Americans United for Life. But Cirignano said the professionalization of the pro-life cause will help it compete against competitors. "Every man, woman, and child gives $1 to Planned Parenthood [every year through tax dollars]. And we’re figuring out how to get money in baby bottles?" Cirignano said, striking a note of incredulity. "This is night and day."

Smaller family-run and religious-order vendors were not wanting at the exhibition. Behind Cirignano was a vendor for the Little Audrey Santo Foundation, an organization known to those on the pro-life circuit and Massachusetts, where Santo’s family lived but to few outside it. Next door were three nuns in full habits vending a table for the St. Benedict Center, a traditional monastic religious order.

Yet movement heavyweights such as the Knights of Columbus, the EWTN television network, and the Heritage Foundation had tables, too. Fifty-one vendors were listed in the March for Life’s program, although this reporter counted 46. Still, the number is an increase from the 10 to 12 vendors in previous years, a pro-life activist said, speaking on condition of anonymity, to discuss the matter freely.

For pro-life leaders, the switch to a larger venue this year gives them the opportunity to get their message out and build their brands.  In years past, they attended an evening dinner at the Hyatt on Capitol Hill, a well-worn destination for politicos.  On Wednesday, the movement’s lieutenants attended a larger dinner at the Renaissance Washington, a larger and more chic hotel that accommodates movement activists and speakers.

The conference and exhibit was the biggest of the non-march events, but not the only one. Democrats for Life of America, a group that seeks to turn around its ailing fortunes of electing anti-abortion Democrats, holds a board meeting Friday. The Cardinal O’Connor Conference, an all-day legal conference, scheduled its annual confab on the campus of Georgetown University for Saturday.

Those conferences come as the pro-life movement expands beyond Washington, D.C. Over the weekend, anti-abortion rallies were held in Chicago and Portland, Oregon. A bigger rally, the West Coast Walk for Life, is scheduled for this weekend in San Francisco.

For one activist, the movement became more professionalized after the death of