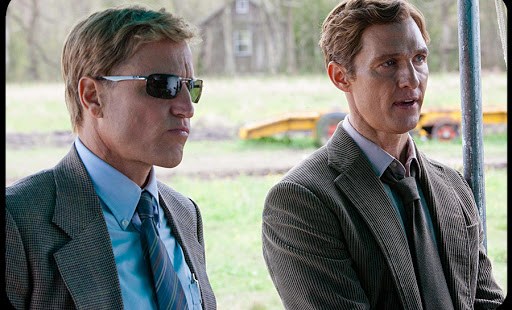 …and why it can’t seem to win any awards

The HBO Series True Detective didn’t win a single SAG award last month. It didn’t win a single Golden Globe. And before that, despite being nominated for twelve awards, it walked away from the Emmy’s with only one win. It didn’t even earn a mention on AFI’s list of the top ten TV shows of the year, outranked even by ABC’s How to Get Away with Murder.

This will strike any fan of the show as manifestly unfair; it will strike a disinterested observer of culture as downright bizarre. The critical and popular reception of True Detective was positive across the board. Never mind other TV shows; the HBO crime drama was better viewing than most films cranked out by the Hollywood-industrial complex. From its eclectic Americana soundtrack pulled together by music legend T-Bone Burnett, to the philosophical writing at the hands of former professor Nic Pizzolatto, to the stellar performances from Matthew McConaughey and Woody Harrelson, it was one of the finest productions to ever elbow its way into a TV set. And it wasn’t only the critics that were raving. McConaughey’s iconic performance as the pessimistic detective Rust Cohle was parodied everywhere, from Jimmy Kimmel, to Funny or Die, to SNL, to The Soup. The buzz was everywhere, and everyone was talking about it. It was a cultural moment.

So why has it been snubbed at all the major award shows? Was it the accusations of plagiarism and misogyny? Was it that it was just bad timing, with other shows like Breaking Bad having their “moment”? Or was True Detective at the end of the day just too mind-bendingly, soul-crushingly dark?

The answer is: none of the above.

The true reason, I suspect, rests with Rust Cohle and his infamous monologues. Cohle articulates different metaphysical viewpoints throughout the season: we see, in his first lengthy speech, an eliminative materialist convinced that we are all “things that labor under the illusion of having a self”; we see the pessimism of Schopenhauer, which picks apart the imperiousness of human will lurking behind veils of piety; we see an almost Manichean dualism and dread of creation (“The hubris it must take to yank a soul out of non-existence into this meat, and to force a life into this thresher,” he says at one point, contemplating the loss of his daughter); and in the final scenes, we see a lurch toward a religious vantage point, an anchoring belief – you might even call it faith – in a communion of persons and a deep, dazzling darkness beyond death.

But despite his philosophical evolution, Cohle’s stance throughout the majority of the episodes – a stance mirrored in the action of the series – is Nietzschean. Cohle’s famous line about time being a “flat circle” is a clear nod to Nietzsche’s theory of eternal recurrence; but in more profound and subtle ways, the show plunges us into the Nietzschean framework, and in particular, to a crisis of nihilism. All the distressing sights, sounds, and moods masterfully arranged by Cary Joji Fukunaga (who brought home that lone Emmy) are mirrored by Cohle’s articulations, and both point toward a fundamental loss of meaning. In responding to claims of plagiarism, Pilzzolatto said:

“Nothing in the television show True Detective was plagiarized. The philosophical thoughts expressed by Rust Cohle do not represent any thought or idea unique to any one author; rather these are the philosophical tenets of a pessimistic, anti-natalist philosophy with an historic tradition including Arthur Schopenhauer, Friedrich Nietzsche, E.M. Cioran, and various other philosophers, all of whom express these ideas.”