UK Parliament Okays “Three-Parent Babies.” Is US Next? 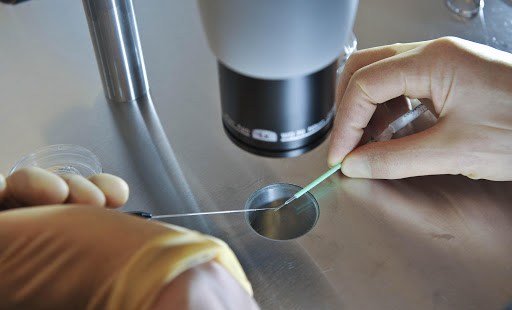 Opponents say the UK vote crossed an important moral line that might lead society to a “point of no return.”

The same sort of technology that the UK’s House of Commons approved of this week, ushering in so-called “three-parent babies,” is under serious consideration by the US government.

A bill passed Tuesday in the lower house of Parliament would allow for the first time anywhere in the world the creation of persons comprised of DNA from three parents. Members of Parliament voted 382-128 to legalize the procedure, which advocates say is needed to prevent a devestating hereditary disease.

The bill goes before the House of Lords later this month.

The new fertility techniques aim to help women who are carriers of mitochondrial disease from passing it on to their children, according to the Associated Press. Mitochondria are the energy-producing structures outside of a cell’s nucleus, and defects in them can result in degenerative diseases including muscular dystrophy, problems with the heart and kidneys, severe muscle weakness, epilepsy and mental retardation.

But opponents say the UK vote crossed an important moral line that might lead society to a “point of no return.”

“Whilst the Church recognizes the suffering that mitochondrial diseases bring and hopes that alternative methods of treatment can be found, it remains opposed on principle to these procedures where the destruction of human embryos is part of the process,” said Bishop John Sherrington of the UK Bishops Conference Department for Christian Responsibility and Citizenship after Tuesday’s vote. “This about a human life with potential, arising from a father and a mother, being used as disposable material. The human embryo is a new human life with potential; it should be respected and protected from the moment of conception and not used as disposable material.”

For Edmund Adamus, director of the Office of Marriage and Family Life of the Archdiocese of Westminster, it’s a case of caveat emptor. Though the new technology is promoted as a great panacea, one must recall the promises made by the embryo research lobby in the past.

"In the late 1980s they told infertile couples that allowing IVF would improve their hopes, but infertility services remain poor — arguably worse than before, since very few places offer anything but IVF (which has a very poor “success” rate)," Adamus wrote in an email to Aleteia. "Look at the situation of those with degenerative diseases promised miracle cures if the 2001 amendments to allow embryonic stem cell research were permitted: result — no advances in treatment or tissue regeneration achieved by killing embryos, but many promising leads from the use of adult stem cells, derived by ethical means."

Ahead of Tuesday’s vote, the Dignitatis Humanae Institute, a Catholic organization which promotes human dignity based on the recognition that man is made in the image and likeness of God, said Parliament would have to consider both safety and ethical concerns.

“In one of the two techniques, pronuclear transfer, two embryos are created and combined to produce a healthy embryo, resulting in the destruction of the embryo created from the donor egg," the institute said in a press release. "The other technique, maternal spindle transfer, involves the manipulation of the egg cell outside of the womb, combining egg cells from two different women.”

The press release quoted Lord Alton of Liverpool, who is not only a member of the House of Lords but also the Convenor of the Dignitatis Humanae Institute’s Cross Party Working Group on Human Dignity.

“It is essential to voice support for those who suffer from mitochondrial diseases and to ensure that medical care is always sufficient,” Lord Alton said. “At the same time, it is equally important that scientific progress is in line with human dignity, which it must serve, rather than vice versa. It is not morally acceptable, and it can never be morally acceptable, to destroy one person, harvesting their DNA for the needs of another person, which one of these two methods permits. This is the fast road to any of the futuristic dystopias one can find at any cinema.”