My Teenage Daughter Wants A Tattoo—Help! 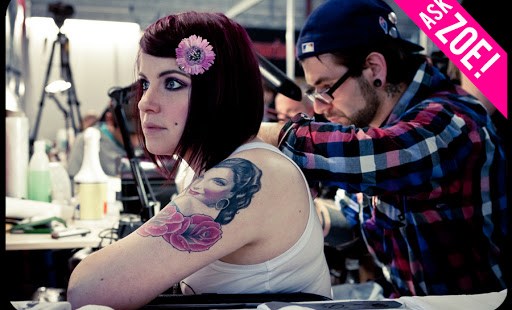 Ask Zoe is Aleteia’s advice column addressing the every day decisions we make and how faith informs and guides them. If you have a dilemma, question, or need some general advice for your life, email Zoe. All questions are given consideration and names are withheld.

Dear Zoe,
My 16 year-old daughter wants a tattoo—mainly because she thinks they’re cool and all of her friends are getting them. I was raised to believe tattoos are a no-no and I don’t like them, but these days everyone under 30 seems to have one so maybe I’m just an old fogey. What should a good Catholic parent do here?

Dear Tattoo-loather,
First, let’s put tattooing in context because it’s more than just skull and crossbones on Harley riders and "tramp stamps." Tattooing has been practiced for centuries in many different cultures for many different purposes, such as: rites of passage, status, beautification, bravery, fertility, and identification. These days, in the west, tattoos are mainly used as a form of self-expression, although permanent make up (like lip or cheek color)—also a form of tattooing—is becoming increasingly common.

Tattoos can be temporary—like henna tattoos, which Indian brides often do before their weddings. Or tattoos can be permanent, where indelible ink is placed into the dermis layer of the skin (below the epidermis) in order to change the pigment. A little reasearch will show the various kinds of tattoo applications out there today.

The Catholic Church doesn’t prohibit tattooing, but it does have wisdom to offer when it comes to making decisions about such things…

The Catechism warns us of sins against the body, which includes things like mutilation and mistreatment. We are to treat our bodies as temples of the Holy Spirit, which means respecting ourselves and adorning our bodies in ways that are dignifying.

Tattoos do not necessarily violate any of this. The biggest issue is that they’re often permanent (and I presume this is the kind your daughter wants). What are the chances that the tattoo she wants now at 16 is what she’ll like at 40 or 60? (Yes, there are ways to remove tattoos, but they’re arduous.) While it’s hard for teenagers to think beyond today, make sure your daughter understands a permanent tattoo is for life.

The other issue is how healthy it is to have permanent ink drilled into your skin Not life-threatening, but also not exactly going to win any ribbons for being the best thing you can do to your body.

Then there’s the actual image your daughter wants, where she wants it, and how much of an attention-getter it will be. It goes without saying that Christians shouldn’t adorn themselves with immoral or Satanic images, for example, and while your daughter may be gaga about her boyfriend right now, his name isn’t the most prudent thing to tattoo on her arm. These kinds of specifics need to be thought through.

I myself lean towards no permanent tattoos while children are still minors. They can do it once they’re on their own, making decisions for themselves. Hopefully they’ll be guided by the principles above.

As a compromise, you might consider allowing your daughter a temporary tattoo. Henna is a plant-derived substance which can be painted on the skin, and the designs can be beautiful. However, because henna lacks additives, it doesn’t have the bright colors typical of temporary decal or permanent tattoos. (If you do choose henna, make sure it’s pure henna as serious problems can occur from using henna with additives.) You can also find lovely and fun temporary decal tattoos on etsy.

Lastly, I encourage you to help your daughter understand that sometimes the coolest thing you can do is not to follow the crowd. But easier said than done, I know.

********
If you have a dilemma or question for Zoe, please send it to: askzoe@aleteia.org

Zoe Romanowsky is the Lifestyle Editor and Video Curator for Aleteia. A freelance writer, blogger, and consultant, she’s been published in many national publications including Real Simple, Catholic Digest, Baltimore Eats, and TruthAtlas. Zoe holds a Masters degree in Counseling from Franciscan University, and a certification in life coaching from the Coaches Training Institute (CTI). She’s an urban homeschooling mother of twins with a weakness for dark chocolate, Instagram, vintage Harleys, and vodka martinis—not necessarily in that order.