Look at What These Babies are Doing in the Womb! Amazing 3D Photos

I’m a picture person. I just love the way pictures communicate a message and bring us into a moment. At my pregnancy center I’ve had the pleasure of watching moms react to seeing their preborn children for the first time. Although I can’t share those beautiful pics with you, I can share some amazing preborn pics that are floating around the web. Here are five of my favorite womb selfies.

Babble online magazine
shared this picture of a preborn baby waving in the womb. This little one is making its presence known. The pic reminds me of the neighbor I say hi to every morning on the way to work. Only, unlike my neighbor, this little person has a long way to go before he or she can shovel snow off a car in below freezing weather. 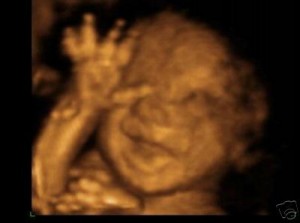 2)
The Womb-Mates
I always wanted to be a twin, but it never happened for me. I can’t imagine how cool it would be to have a womb buddy from birth.
These fascinating 3D pics of twins in the womb are from an international scientific journal study from Jaypee. Can’t you feel the love just looking at them cuddle? 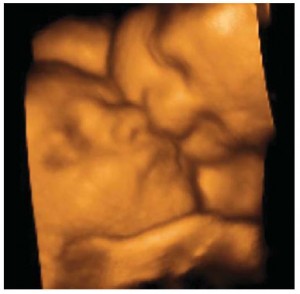 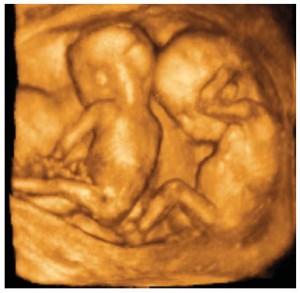 3)
The Smiler
You know that Pharrell song "Happy" that everyone was dancing to at the Grammy Awards?  This little one is feeling the happiness even before birth.  Baby Leo was
featured in an article in The Telegraph because his big smile in this 4D ultrasound photo caught the attention of modeling companies. 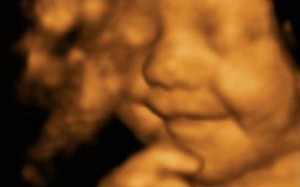 4)
The Ponderer
This little baby’s pics got
posted on the website BabyGaga in a contest for the best ultrasound pic. This preborn cutie reminds me of the bronze statue, "The Thinker." Since this baby is holding his chin instead of resting his head on it, I’ll assume he’s in deep thought and call him/her "the ponderer." Perhaps he’s wondering when he’ll make his entrance into the earth. 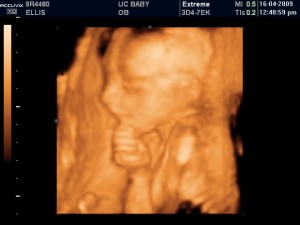 5)
Hide and Go Seeker
This precious one looks like he’s playing games in his mom’s tummy. Now you see me and now you don’t. Pics
like this are possible through places like
Peek a Boo 3D/4D Ultrasound studios. 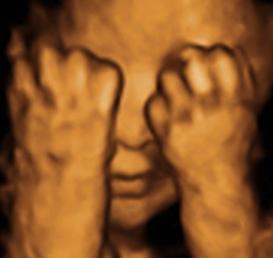 Aren’t preborn babies beautiful? Seeing the images of these children should cause us to be in awe of the miracle of life. Life at all stages is worth protecting. Recently, a client at our pregnancy center had an ultrasound. After the appointment, she wrote on an exit form that seeing her preborn baby made her realize she couldn’t chose abortion. The baby’s picture touched her heart and helped change her mind – that’s the power a picture can have.

Christina Martin
has been a pro-life voice for eight years. Her work began after her mother confessed she paid a doctor to abort her, but walked out before he could. This article was originally published on Live Action News and is reprinted here with kind permission.