“Their Blood Cries Out To The Lord,” Says Pope Francis of Beheaded Copts 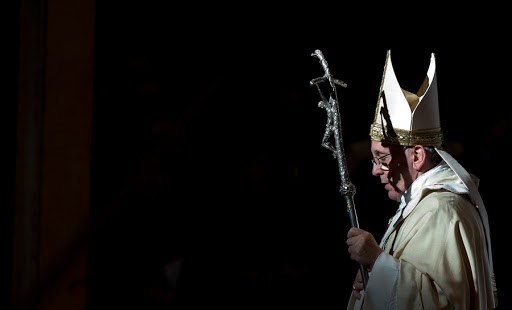 VATICAN CITY — Pope Francis Monday afternoon telephoned the Patriarch of the Coptic Orthodox Church, Pope Tawardros II, to express his sincere condolences to the Coptic Church for the barbaric assassination of Coptic Christians by ISIS on the coast of Libya.

In a statement released yesterday by Father Federico Lombardi, Director of the Holy See Press Office, the Vatican said: “The Holy Father promised his prayers today and also tomorrow, the day of the funeral celebrations for the victims, and unites himself spiritually to the prayers and the sorrow of the Coptic Church in his Morning Mass.”

At the end of his prepared address to representatives of the Church of Scotland, the Pope switched to his native Spanish, and turning to the beheadings in Libya, said: “Today I read about the execution of the 21 or 22 Coptic Christians. Their only words were: ‘Jesus, help me!’”

Noting Chalmers’ remarks on events currently unfolding in the Holy Land, Pope Francis said: “The blood of our Christian brothers and sisters is a blood that cries out to the Lord."

“It makes no difference whether they be Catholics, Orthodox, Copts or Lutherans,” the Pope continued. “They are Christians. Their blood is one and the same. Their blood confesses Christ.”

A video of the decapitation of the 21 Copts kidnapped in Libya at the beginning of January was posted online by jihadist websites Sunday. The footage shows black-clad militants leading their captives in orange jumpsuits along a beach before forcing them to kneel.

Before the mass beheading, one of the militants stands with a knife in his hand and says: “Safety for you crusaders is something you can only wish for.”

Images from the video show waves of the Mediterranean breaking on the beach, turning red from the blood of the victims.

The killings took place less than 500 miles from the southern tip of Italy, raising concerns that ISIS has established a direct affiliate within striking distance of Europe. One of the militants in the video speaks directly to their intention, saying the group now plans to “conquer Rome,” the Associated Press reported.

In the face of the brutal slayings, Pope Francis urged all Christians to work even harder for unity among themselves.

“As we recall these brothers and sisters who were killed only because they confessed Christ,” he said, “I ask that we encourage one another to go forward with this ecumenism that is emboldening us, the ecumenism of blood. The martyrs belong to all Christians”.