Richard John Neuhaus: A Life in the Public Square 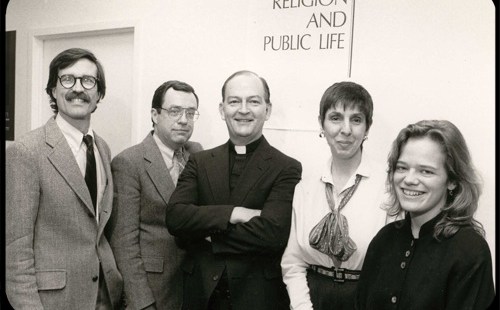 New biography captures spirit of the of the great Catholic intellectual

I last saw Richard Neuhaus in the early fall of 2007. We were having supper in his apartment house, 338, everyone called it. My wife was with us. He had spoken the night before at a dinner at Immanuel Lutheran Church, at 88th and Lexington. The dinner marked my retirement after seventeen years as editor of Forum Letter, an independent Lutheran publication that he had edited for sixteen years before nominating me as his successor.

That is how I met him. I found Forum Letter as a 1976 first-year Lutheran seminarian and we struck up a correspondence. He resigned as editor with the July 1990 issue. I had produced my first issue that August. Then in September he announced he was leaving the Lutheran Church for the Roman Catholic Church. Thanks, Richard. I did not begrudge his transition. I remember remarking, knowing Neuhaus, the wonder wasn’t that he had done it but that it had taken him so long. He was a very Catholic Lutheran.

Both of those evenings were uneasy for me. Think of this. A Lutheran publisher, the American Lutheran Publicity Bureau (ALPB), calls in a Roman Catholic priest, even if he had been the previous editor, to note the retirement of his still-Lutheran successor. Richard’s remarks, best I remember, focused not on the work of the ALPB but on the broader state of the universal Church, situated best, he said, in the Church of Rome.

My responding remarks addressed, out of necessity, I thought, why I had resisted going to Rome and why I was remaining a Lutheran. The dichotomy could not have been clearer.

In his apartment the next evening, I pressed him a little. What did he think of my speech? He didn’t want to discuss the matter, but finally he ticked off the four points I had attempted to make and smoothly, though not without a certain kindness, refuted each.

We bid our farewells. I told him I was ever grateful for his friendship through the years; my life was infinitely better for all the nights he had let me crash on his sofa when I was in New York. He was a man of deep intellect and deeper faith, with a stirring, earthy piety I envied. He instilled admiration among those who knew him, and not infrequently he inspired their intense personal loyalty. For me he was a mentor, a pastor, sometimes a critic (whether I needed one or not), but always a friend.

Ultimately he won our argument from that long ago evening; I have left the Lutheran pastorate, headed now for Rome. Let’s just say that since his death, I learned the man can wheedle as well dead as he ever did alive.

I have never read a biography of someone I knew well. It was with apprehension, then, that I read the galleys of Randy Boyagoda’s biography of Neuhaus. He had interviewed me (and many, many others with keener perspectives on Richard). I was hoping it would be a good one but I was having trouble figuring out how anyone could capture Neuhaus whole.

Boyagoda found the Neuhaus I knew, complete with all the man’s winsome qualities and not a few of his contradictions. Not surprisingly, he also revealed facets of the man I could never guess.

A Ryerson University professor of American Studies in Toronto and a novelist of growing reputation, Boyagoda has given us a meat-and-potatoes biography. I regard that as a good thing to say. He traces Neuhaus’s life from Pembroke, Ontario, to a Nebraska boarding high school; to Cisco, Texas, then seminary, then to Brooklyn as pastor of St. John the Evangelist Lutheran Church. It was from St. John’s that his real influence began among many pastors – Lutherans and otherwise – with his inner-city parish ministry. The worship was broadly catholic in content and deliberately connected to the surrounding poverty of the community.