Cardinal George Pell: The Church That Fills Me with Hope for Europe 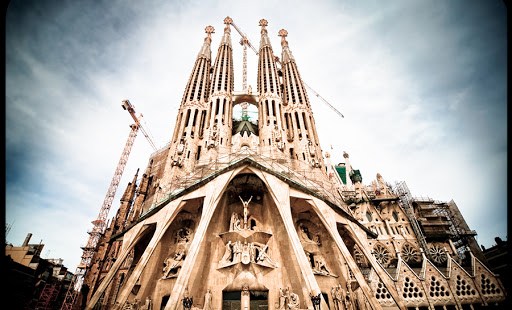 I went to Barcelona by chance. My brother’s wife and daughters had been delighted by this elegant city in northern Spain and especially by the basilica of the Holy Family. They convinced my brother that he too needed to see the city and he asked me to join him on a visit.

Naturally I knew of the church and of Pope Benedict’s enthusiasm for it. One of the architects of the new Benedict XVI Retreat Centre of Sydney archdiocese had also written an article of commendation. While I shared many of their artistic judgments, I was put off by photos of the basilica’s exterior. It all seemed a bit loopy: Picasso in Hollywood. But I knew nothing of the basilica’s interior (and not much more, in fact, about the exterior). I was quite prepared to be unimpressed.
My visit completely changed my opinion as the basilica is a work of genius. This place of worship speaks of God to the people of today (and tomorrow) more eloquently then any church I know. Catholic symbols are everywhere, teaching about Christ, the Church, light and life. Already 3,200,000 paying tourists visit each year, so enabling the construction to be continued.

The church is the product of Spain’s turbulent religious history, and during its comparatively brief lifespan it has already been damaged and closed for a time by anti-Catholic violence.

In the 19th century, Barcelona was a center for industrial development when Spain changed from being a colonial and largely rural society. As the democratic, anti-religious and violent forces unleashed by the French Revolution of 1789 spread across Europe, the Spanish state, in 1836, expropriated all the Church’s lands and assets.

In the consequent spiritual crisis the rise of militant unbelief was strongly contested by many Catholic priests and people. The Association of the Devotees of St Joseph was founded in 1866 by the bookseller and philanthropist Josep Maria Bocabella, and grew strongly to a membership of half a million. In 1878 they decided to build an expiatory temple of prayer and worship dedicated to the Holy Family. Work began in 1882, inspired in part by devotion to the Holy House of Nazareth, which was brought to Loreto, in Italy, in the 13th century, probably by Crusaders.

The basilica is not Barcelona’s cathedral and no diocesan or government money has been used. From the beginning, the building was a quixotic exercise. The Sagrada Família’s first architect, Francisco del Villar, persuaded Boccabella not to build a replica of the Loreto shrine, but to follow the then fashionable Neo-Gothic style of the great medieval cathedrals.

Financial and artistic differences provoked del Villar’s resignation, and in 1883 Boccabella appointed the 31-year-old Antoni Gaudí as the new project architect. He remained in this post for 43 years until his death in 1926.

Much of the crypt had been built and Gaudí amended this design only slightly. But his creative genius was soon apparent in a radically different apse, cloister and Nativity entrance façade, and in the detailed construction plans for a startlingly different church he left for his successors to complete.

During the Spanish Civil War of the 1930s the Communists destroyed plans (but not all of them), damaged models and halted work, which did not resume until 1954. The church was originally isolated in the countryside but is now surrounded by shops and apartments. Some of those will be removed eventually to provide a more fitting environment and, especially, a spacious entrance square.

Books will continue to be written about the Sagrada Família, and it is difficult to know where to start in describing so many strange and beautiful features. The church is huge and high, capable of holding 14,000 worshippers, and has space in the elevated choir stalls for 1,200 singers. The main tower will be 560ft high, lower than God’s handiwork of neighbouring Montjuic, a hill that is 650ft high.