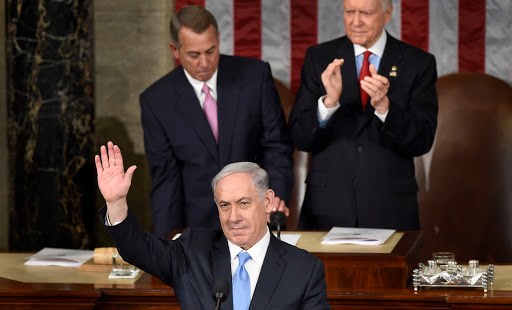 But Pope, many Democrats say dialogue with Iran is possible.

WASHINGTON — Toward the end of his speech to Congress Tuesday, Israeli Prime Minister Benjamin Netanyahu paused to acknowledge a famous survivor of the Holocaust. Elie Wiesel, 86, craned upward in the upper row of the House of Representatives, bathed in the applause of lawmakers, and jutted out and waved his left hand in gratitude.

Then Netanyahu spoke to the famous Jewish author and political activist. "Elie, your words gave meaning to the phrase, ‘Never again!’"

As a guest of House Speaker John Boehner, Netanyahu blasted the nuclear deal the Obama administration reached with Iran and five nations. The premise of his speech was the similarity between Iran and Nazi Germany under Adolph Hitler.

"Standing up to dark and murderous regimes is never easy," Netanyahu said before introducing Wiesel. "Stop threatening to annihilate my country, the one and only Jewish state," Netanyahu said to Iran’s leaders, who have denied Israel’s right to exist.

By raising the specter of the Holocaust, Netanyahu gave a stark assessment of the Muslim country’s intentions toward Israel. Some congressional Republicans agree that post-revolutionary Iran is similar to Hitler’s Germany, but the Obama administration, many congressional Democrats, and key Catholic leaders do not. The disagreement underlies the two sides’ evaluation of the Iran nuclear deal, which Congress may vote on if the six countries cannot reach a new agreement by March 24.

In contrast to Netanyahu, the Holy See and the US Bishops Conference have suggested Iran is open to diplomacy and negotiation.

In February 2014, the Bishops Conference released talking points about the Iran nuclear deal or Geneva interim agreement, which was reached in November 2013. "Pope Francis expressed satisfaction at the ‘significant progress made in the dialogue between Iran and the Group of 5 + 1 on the nuclear issue.’" The memo continued that "(t)he Church and many experts think that successful negotiations with Iran to curb their nuclear program will enhance Israel’s security and regional stability. The alternative, an attack on Iran’s nuclear facilities, would unleash ‘unpredictable regional consequences,’ at best delay the Iranian program and encourage Iranian hardliners to secure a weapon."

House Minority Leader Nancy Pelosi criticized Tuesday’s address. In a tweet, Pelosi said she was "near tears throughout the Prime Minister’s speech … that insulted the intelligence of the United States." Nearly 50 Democratic lawmakers declined to attend the joint congressional meeting, according to The New York Times. President Obama, in a break with protocol, did not invite Netanyahu to the White House after his address. (House Speaker John Boehner broke protocol too by inviting Netanyahu to address Congress without telling the administration first).

By contrast, Netanyahu described Iran as incapable of compromise or negotiation. “I don’t believe Iran’s radical regime will change for the better after this deal,” he said. “It will only whet its appetite.” When Netanyahu described a possible peace agreement between Iran and the five countries that signed the nuclear accord, he suggested Iran should change its behavior unilaterally. Netanyahu urged the country’s leaders to stop aggressive behavior toward its Middle-East neighbors, cut ties with terrorist organizations, and cease threatening Israel’s existence.

Speaking to the congressional members in the audience, Netanyahu said the Iran nuclear deal would embolden the country to build a nuclear weapon.

Netanyahu is up for re-election on March 17.

President Obama dismissed Netanyahu’s address. "On the core issue, which is how do we prevent Iran from obtaining a nuclear weapon which would make it far more dangerous … the prime minister didn’t offer any viable alternatives," Obama told reporters during an appearance with new Defense Secretary Ashton Carter. “(I)f we are successful negotiating, then in fact this will be the best deal possible to prevent Iran from obtaining a nuclear weapon. Nothing else comes close."