I Saw Christ’s Face in the Dominican Republic

Since last August, I have been volunteering in the Dominican Republic, helping to establish a Catholic Worker community in Santo Domingo. I began my sojourn here soon after graduating from the University of Dallas with a major in economics, history and Spanish.

I’m working with Felix Cepeda, a former Jesuit seminarian.  Our primary mission is to give the poor hope and to remind them that they are not alone and that they are in fact loved. The method by which we hope to achieve this is twofold:

• Establish relationships with several clusters of homeless in the city through music, prayer and, most importantly, food.

• Open a House of Hospitality in the city to supply the homeless with a place to rest, bathe and converse.

Our near-term goal is to open the home as a safe oasis and a base of operations, but we pray that we will soon receive the funds to enable several of the elderly to reside in the home permanently.

We visit 40 homeless people twice a day. Today and tomorrow, I’d like to introduce you to two of them.

Nearly six months have passed since I met Esperanza. I remember our first encounter vividly.  It was around 6 p.m. in late August and the 76-year-old lady was sitting down, in what appeared to be a very uncomfortable position, on the corner of the street called El Conde in the Colonial Zone of Santo Domingo. Her head was down and her eyes were shut, but, as I would soon learn, she was most certainly awake.  As I approached her, I was struck by both the number of flies swarming around her, as well as her apparent indifference to their presence.  Aside from the fact that she was homeless and the locals referred to her as Esperanza, I knew nothing about her.

I recited a quick prayer in my head, and then sat down next to her and introduced myself,  “Hello, my name is David Janicki, how is your day going?”

No response, not even a slight lift of her head to acknowledge that someone had just spoken to her.  I continued, “I am volunteering here in the DR for roughly a year.  I am part of the Catholic Worker Movement and our mission is to create a community for the homeless here in the capital.”

Again, no response.  Discouraged, I gently placed my hand on her shoulder and said, “Well I’m going to be coming by here every day.  Have a wonderful evening, and may God bless you.”

Upon hearing those words, she lifted her head and looked me in the eyes. I was shocked at what I saw. Her face was hardened and worn, and her eyes bore the weight of over 15 years of suffering and pain.  I instantly knew then that those eyes had seen the very worst of humanity.  She whispered back to me, “Vaya con Dios (Go with God).”  Unable to conjure up a response, I simply nodded to her, stood up and walked away. 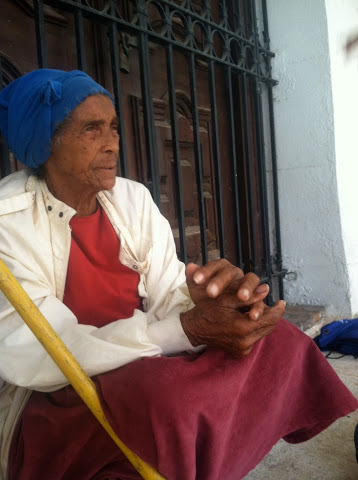 Over the next two weeks, fellow Catholic Worker Felix Cepeda and I met with Esperanza daily, bringing her food and trying in vain to generate some sort of dialogue with her.  Initially, our visits were very short and anything but fruitful.  I learned quickly that Esperanza did not trust anyone, and, as several of her past experiences would later become known to me, I realized that such distrust was more than warranted.

On the second Friday of this two week trial, in an attempt to connect with her hardened and well defended heart, I decided to bring my guitar with me.  Before I even had a chance to say anything to her she surprised me by saying, in a very matter of fact tone, “If the song is not about Jesus, I don’t want to hear it.”

I smiled and replied, “Lucky for us, those are the only types of songs I know…unfortunately this song is in English, but I will explain the meaning of it to you before I sing it.”

After explaining the theme of the song, I played it for her. During the final verse, a very beautiful and frightening moment occurred, which caused me to botch the end of the song and left me in a speechless and blissful state.  As I sang the final verse, Esperanza shouted, “Gloria a Dios (Glory to God)!” and then smiled.

Now, I have seen many beautiful smiles in my 24 years, but there was something different about this smile, something very majestic and profound.  Nothing about her reaction was forced; the smile was completely natural, and almost instinctual.  While she smiled I was able to glimpse, albeit for a brief moment, into the depths of her wonderful heart.  What I saw sent chills to the very core of my being and, without wanting to, I was forced to look away because in that instant I saw the face of Christ. As quickly and mysteriously as this happened, the moment passed and the suffering and pain returned to the solemn face of Esperanza.