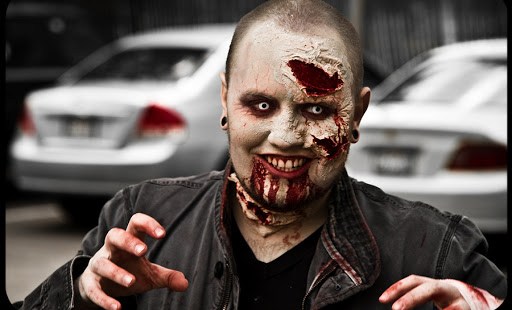 The Zombie Apocalypse isn’t waiting for us in some far-off dystopian future. It’s already here. We live in the midst of it. We just don’t know it yet.

Don’t believe me? Then watch an episode or two of AMC’s hit show, The Walking Dead.

For the uninitiated, in the world of The Walking Dead, huge swaths of the population have lost their humanity to causes unknown.

The show calls them “walkers.” These walkers, as their name suggests, are neither fully dead nor fully alive. They move. They eat. They gravitate towards one another, traveling most often in packs. But they don’t feel. They don’t remember. They don’t know who they are or see the beauty of the world around them. To the walkers, every living creature — person or animal — is nothing but food, something to use or consume.

The show, however, isn’t really about the undead.

It’s about the living. It’s about their quest to not merely survive, but more importantly, to retain their humanity in a world gone mad.

True, the window dressing is different.

Our walking dead smell better and have less blood on their clothing than those meandering about the post-apocalyptic Southern landscape of The Walking Dead. But the worlds remain fundamentally the same.

If you need confirmation, go outside.

Turn on the news. Log on to Facebook. You’ll see the walking dead most everywhere you look. They are the men and women living in mortal sin, those who have broken faith with God in some serious way and bear the open wounds of sin in their souls, if not their faces.

In our culture, the walking dead are legion.

So many live in darkness. So many have turned their back on love and truth, and in the process, have banished the life of God — sanctifying grace — from their souls. They have become spiritually dead, even if they’re physically alive.

They don’t know their dignity or beauty. They nip, tuck, and starve themselves in pursuit of some elusive ideal. They give their bodies away in
the wrong ways and wrong times to the wrong people. They worship youth and fear age.

They also don’t know why they were created or what it means to live a fully human life.

They don’t see the meaning or the purpose written in creation. They don’t hear the heavens proclaiming the glory of God. Instead, they find meaning in things — in cars, cash, sex, and food. They pursue pleasure, whatever the cost, and avoid suffering, whatever the gain. Their appetites are their god, and consumption is their worship.

Lastly, our walking dead fail to see the dignity of the people around them.

Rather, they see them as objects to be used — for pleasure, sexual satisfaction, or some sort of gain — or, worse still, as inconveniences to be rid of. In their own way — through gossip, cruel speech, acts of betrayal and infidelity — they too eat their own.

The perpetual struggle for each of us, like the protagonists on The Walking Dead, is not to join their ranks.

It’s to retain our humanity in an increasingly inhuman world. It’s to keep the life of God in our souls, treating the wounded with mercy and compassion, and hoping, in the midst of cultural chaos, for a better world.

The good news is that our zombie apocalypse if far easier to combat than AMC’s version.

For starters, in our world, a knife through the skull isn’t the only way to deal with the undead.

Here, the walking dead can be cured. They can be restored to life — spiritually resurrected through the graces of the sacraments. Healing graces abound on this earth. They are in every Catholic Church, every confessional, every Eucharist.

It gives us many beautiful insights into human sexuality and married love, but those insights are just a part of the theology of the body. They’re not the whole.

The whole encompasses masculinity and femininity, motherhood and fatherhood, the priesthood and religious life, not to mention friendship and work, liturgy and sacraments, food and fashion, technology and media, dieting and exercising, even driving and tattoos.

Essentially, anything we do in these bodies of ours falls within the purview of the theology of the body.

In a way, the theology of the body is like hooked on phonics for the sacramental worldview.

Using the human body as its starting point, it helps us learn to read the world rightly once more. It reminds us who we are: the living images of the living God. And it reveals to us the meaning and purpose of creation, showing us a world teeming with grace, where every bee, butterfly, and man uniquely and wonderfully reveals some truth about the Creator.

The theology of the body likewise teaches us how to love.

It calls us not to use others, but to give ourselves in love to others — to become a gift, poured out in imitation of the One we image — and to honor all those we encounter as the gifts they are.

All the zombie apocalypse would take from us — our dignity, our beauty, our ability to love as God loves and give as God gives — the theology of the body helps restore.

That’s not a journey we can complete in 16 episodes.

Long after the walkers of The Walking Dead have gone to their eternal rest, we (God willing) will still be traveling through the fallout of our own zombie apocalypse. But with the sacraments as our nourishment and the theology of the body as our guide, we can do more than survive a world ravaged by the walking dead.

We can begin to heal it.

Emily Stimpson is the author of These Beautiful Bones: An Everyday Theology of the Body (Emmaus Road, 2013).

This article was originally published by The Franciscan Way Magazine and is reprinted here with kind permission.