A 7-Week Embryo That Changed Hearts and Minds 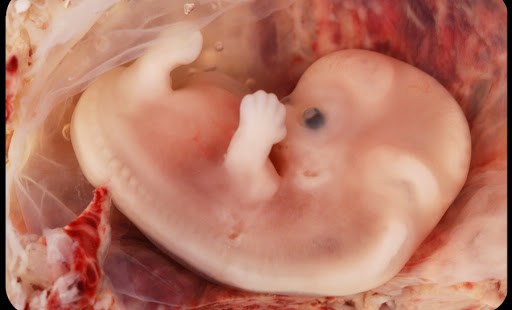 A mother posts a photo that goes viral, and it’s an argument against abortion all on its own

On February 28, the pro-life activist Abby Johnson, a former abortion clinic director, posted on her Facebook page a photo that is an argument against abortion all on its own:  a seven-week-old embryo, whose eyes, arms and legs are perfectly visible.

The photo was accompanied by following message, which the mother sent to Abby’s pro-life group.

Here is the story:

"I had a miscarriage on Palm Sunday last year. We think he was a boy and named him David Raphael. My only prayer when the doctor told me at 11 weeks that my baby had died a month earlier (at 7 weeks gestation), was that I would have something to bury.

The doctor said he would either be too small to find or that his fragile body would be crushed in the miscarriage process and there wouldn’t be anything left.

On Palm Sunday afternoon he came out. The entire sac was intact and there he was still floating in the amniotic water. I took a picture so I wouldn’t forget that moment and how God answered my prayer. I think it would be an amazing photo to show people contemplating abortion. Even though he was only 7 weeks when he died, you can see his little arms and legs forming.

My 4-year-old was looking through my phone when I wasn’t looking one day and found the picture. He came up to me with it and asked me whose baby it was. Even a child can tell that at 7 weeks, the fetus is a little person."

The image has gone viral, receiving more than half a million "likes" since it was posted.