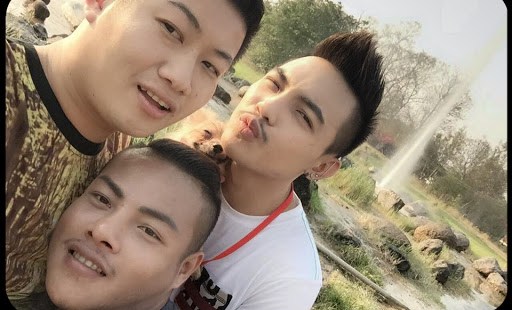 If marriage is what you want it to be, why not?

Three Thai men have advertised their “marriage” on the internet and appeared in Thai media, claiming the distinction of being, possibly, the first gay men to have a three-way wedding. Joke, 29, Bell, 21, and Art, 26, had their ceremony on Valentine’s Day in Uthai Thani Province. At Breitbart, Thomas D. Williams notes:

Art and Joke formed a couple, and later were joined by Bell, reports the New York Post.

“I think we are first three-way same-sex males to have a wedding—possibly in the world,” said Bell. “Some people may not agree and are probably amazed by our decision, but we believe many people do understand and accept our choice. Love is love, after all.”

But for how long? The story has all the gravity of a Hollywood celebrity wedding, and what will be really amazing is to find that these three men are still “married” in a couple of years’ time, even according to their own criteria. Or if they are, whether the criteria exclude other relationships. Throuple weddings look like advance publicity for knocking down the next marriage hurdle, monogamy, as many have predicted.

Marriage itself has never been the ultimate goal for some sexual libertarians, as the 2006 Beyond Marriage manifesto, signed by over 300 scholars, writers and assorted activists, showed. “Marriage is not the only worthy form of family or relationship, and it should not be legally and economically privileged above all others.”

Creating parodies of marriage is one way to diminish its worth.

Last April three Massachusetts lesbians who claim to be married announced they were expecting “their” first child. Doll, Kitten and Brynn Young exchanged vows in a commitment ceremony eight months earlier. However, the trio seem to have retired from public life as there is nothing on the internet about them—at a glance, anyway— since the pregnancy news.

Massachusetts was the first US state to legalise same-sex marriage but it does not (yet) allow formal polygamy, and nor does any other state in the US. Brynn and Kitten (34 and 27 a year ago) were married in November 2011 under Massachusetts law, and later Doll, married twice before to other women, joined them.

Kitten, the youngest, became pregnant with the sperm of an unknown donor.

When approached by the New York Post, a representative for the state’s attorney general declined to comment on the three-way union.

Massachusetts law-enforcement sources said they wouldn’t go after any of the lovebirds unless the third “wife” sought some kind of recognized marital benefit, such as filing joint tax returns.

According to an account of the ceremony by the women themselves, two of them were not keen on the marriage angle anyway, but Kitten was:

We come from very mixed backgrounds. Kitten was raised Christian but is now Pagan. Doll is also a Pagan, and Brynn is Agnostic. One huge challenge was creating a ceremony that included all the beliefs of each bride. Kitten is very traditional because of how she was raised. She wanted her father there and a white wedding dress. Doll, not a huge believer in legal marriages, leaned more towards handfasting and bonding. Brynn, married before, had little interest in weddings at all. All these things combined lead to the decisions of a Pagan priest with a one-day justice of the peace license.