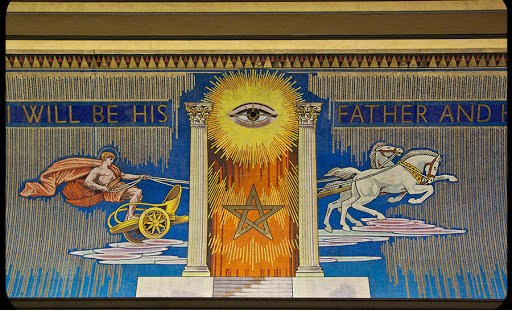 The unintended message of the Church’s wildest critics

“Don’t get me wrong. I love Catholics,” he said. People like Jim Nations always do, even when they’re claiming that the Church those Catholics love is malevolent and mendacious. Despite all the gains in friendship between divided Christians, the outer fringes of conservative Protestantism include some people who think the Catholic Church is a Big Bad Really Devious Wicked Thing in league with Other Forces of Darkness.

For example, the man who makes sure you know he loves Catholics and the television show that features him. Reports Bob Sullivan, writing in the latest issue of Catholic Answers: Nations, a colleague of televangelist Jimmy Swaggart, tells a church group that “the Jesuits invented the Freemasons as a fake Christian secret society, in an effort to reverse the reformation and create a ‘One World Order.’” As Nations himself put it on the Swaggart show’s website: he explains “how Freemasonry, Islam and the Roman Catholic Church connected and were now working together toward a New World Order which is spoken of in Revelation Chapter 13 & 17.”

You may be thinking that this man is, as my grandmother used to say, crazy as a bedbug. The Church’s hardest critics among our Evangelical brethren will say that she is corrupt, unbiblical, teaches a false gospel of faith by works, and the like, but it would never occur to them to say the Church is part of a secret conspiracy with Freemasons and Muslims.

This kind of thing — the Nations/Swaggert view of Catholicism — is certainly a byway in American Christianity with little effect on anyone else. There aren’t a lot of people like this, but there are more of them than you might think and, most importantly, they represent the pure version of beliefs some other Evangelicals, people with whom we may work, have in diluted form.

Some years ago when I was still an Episcopalian, I was talking with a new friend, a conservative Presbyterian. We were lamenting the barriers to improved relations between divided Christians, and I made fun of some book that claimed tunnels ran between the Vatican and nearby convents so that priests and nuns could have orgies hidden from the world. My new friend said quite seriously, “Well, that’s true.” Not
was true, but
is true. I said it wasn’t, he said it was. He was not to be dissuaded. He turned out to believe a lot of stories like that one.

Since becoming a Catholic, I’ve had conversations that were going along swimmingly when the other person let drop some old anti-Catholic canard as crude as my new friend’s. Usually unknowingly, too. They seemed to assume a Catholic they can talk with isn’t really a convinced Catholic and will agree with them. My protests surprised them.

But the Church as part of a secret Freemason/Muslim/Catholic alliance, this goes several steps beyond  the usual prejudice. The usual explanations for extremism must apply to this group: cultural marginalization, economic vulnerability, the creation of social cohesion through scapegoating, fear of the other, a history of prejudice inherited from the past. It’s also an easy bigotry to indulge, as these people rarely have to engage a Catholic. They can say rude things about Catholics as they might about Martians. Their words will never come back to bite them.

I think there are at least a couple of other reasons. One is the great attraction of seeing through something, of knowing the real story behind the story everyone else believes. We all know the attraction. It’s one reason we gossip. “Of course everyone thinks he’s a good Christian. But you know,
really . . .” For various reasons, people like Nations lack that alarm that tells them when they’ve crossed the line from plausible explanation into absurdity.