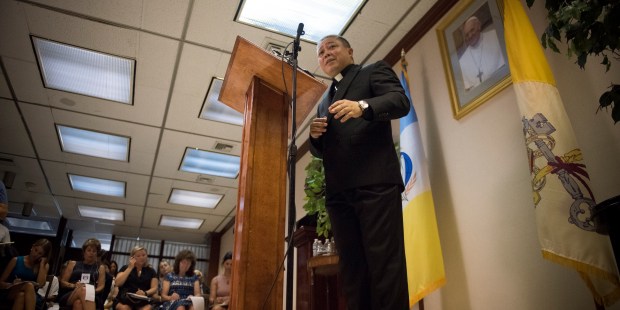 Pontiff will address General Assembly, have informal meeting with staff

During his first visit to the United States, the Pope is expected to visit New York, Washington, and Philadelphia. The trip coincides with the World Meeting of Families in Philadelphia, but it also will take place as world leaders gather in New York for the UN General Assembly.

Francis will address the General Assembly, meet privately with Ban, and hold a town hall style meeting with staff.

"The Secretary-General welcomes the visit of Pope Francis as an important part of a historic year in which the United Nations marks its 70th anniversary and in which Member States will take major decisions about sustainable development, climate change and the future peace and well-being of humankind," said a statement issued Wednesday by the office of Secretary-General Ban Ki-Moon.

"The Secretary-General is confident that His Holiness Pope Francis’s visit will inspire the international community to redouble its efforts to achieve human dignity for all through ensuring greater social justice, tolerance and understanding among all of the world’s peoples."

Cardinal Timothy Dolan, archbishop of New York, issued a statement Wednesday welcoming the announcement. “We eagerly look forward to further details about the Holy Father’s time in New York, and I know that I speak for all New Yorkers in expressing the great anticipation and growing excitement that he will be with us in a matter of months,” he said.

No other details about the Pope’s time in New York were available.

The stop at the UN comes a day after the Pope is expected to address Members of Congress in a joint session. He was invited by House Speaker John Boehner.

According to the New York Times, the September gathering will most likely be unusually packed because of the United Nations’ 70th anniversary.

"Governments are expected to adopt binding agreements on climate change and set new development targets for the next 15 years," the Times said.


Hovering over the session are the war in Syria, the spread of Islamic jihadists across the Middle East, along with an ethnic war in the world’s newest nation, South Sudan.

The Vatican is influential at the United Nations, particularly in shaping international agreements on sexual and reproductive rights.

Pope Francis has said he intends to push for international commitments this year to curb greenhouse gases and help poor countries protect themselves against climate-related hazards. He has spoken out for the need to address global inequality, and has sharply urged European countries to accept more refugees fleeing war in the Middle East and North Africa — all issues that are central to discussions at the United Nations.

Among those welcoming the announcement was Father Gerald Murray, pastor of Holy Family parish, which covers the territory of the United Nations on Manhattan’s East side.

"Our mission is to serve the UN community, so what better way for the Catholic Church to serve the UN than to have the Pope go there and speak to not only world leaders but also to the staff," Father Murray said in an interview. He said that many of his parishioners work at the UN and will be happy about the prospective town hall meeting with the Pope.

"When Pope Benedict was there [in 2008] one of my parishioners was working in the UN at the time and different people who work at the UN had to opportunity to meet Pope Benedict privately," he said. "This seems to go to the next step, of not only meeting them but having a conversation with people working at the UN."

“The bishops of Africa have spoken loudly about what they call ‘cultural imperialism’ coming from radical NGOs and UN agencies. This is usually in form of UN style family planning, comprehensive sexuality education, abortion, faux-marriage and the whole panoply of failed propositions of the sexual revolution," Ruse said in an email to Aleteia. "I fervently hope that Pope Francis speaks to this. No doubt he will be welcomed with open arms, open hearts, and open ears. They will listen, even if he delivers a hard message.”