Jeb Bush is a Catholic Convert. Did He Switch for Religion, Politics, or Both? 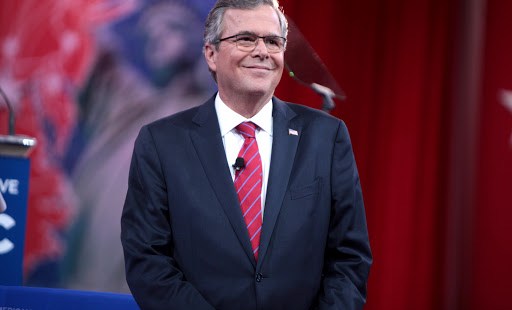 Everyone suddenly wants to know

WASHINGTON – Jeb Bush is widely known for being a member of a Republican political dynasty and an all-but-declared presidential candidate. Less known is that Bush is a Catholic convert. How “Catholic” was he as governor of Florida and do the reasons for his conversion matter?

In The New York Times, reporter Michael Paulson examined Bush’s eight years in office in the Sunshine State, 1999 to 2007. Paulson suggests that Bush governed more often in line with Catholic social teaching than not.

On one hand, Bush adhered to many of the Church’s social and cultural positions. He established the nation’s first faith-based prison, sought to force a hospital to keep Terri Schiavo on life support and to appoint a guardian for the fetus of a rape victim, and signed a bill to set up “Choose Life” license plates. In addition, Bush received praise from Cardinal Timothy Dolan of New York for his moderate or establishment-friendly positions on immigration and education.

On the other hand, Bush oversaw the executions of 21 prisoners, the most of any Florida governor since the state brought back the death penalty in 1976.

Bush is not the first Republican official who governed in accord with Church teaching on abortion, faith in the public square, education, and immigration and governed in discord with it on the death penalty. But the conflict invites speculation about the reason for his conversion from Episcopalianism to Catholicism in 1995.

After all, Bush did not convert until he was 21 years into his marriage to Columba Bush in 1974. A year earlier, Bush lost a race for governor. According to progressive provocateur and talk-show host Bill Maher, Bush converted to help his chance of winning a second race in 1998. As Salon noted, Maher speculated that Jeb followed the lead of his younger brother, George W, but the reality may be more complex:

“Did you know Jeb Bush is Catholic? Neither did I,” wrote Maher. “[He] converted to Catholicism in 1996 — 22 years after marrying his Mexican-born wife, Columba, [sic] — and conveniently between the first time he ran for governor (and lost) and the second time he ran, and won. The Bushes play election hardball, but they also play the margins. They look for every little edge. So is there something to this?”

That may be a helpful strategy for state elections, but Bush’s Catholicism probably won’t help much if he embarks on a national campaign. According to
Pew Research, only 23.9 percent of Christians identify as Catholic nationally, while over 50 percent identify as some sort of Protestant.

Maher attributes purely political motives to Bush for his conversion. By contrast, Paulson of The New York Times suggests that Bush converted more for religious than political reasons:

Mr. Bush was officially received into the Catholic Church at the Easter vigil of 1995, making a profession of faith and being anointed with oil before receiving communion for the first time as a Catholic.

“I had decided to convert after my campaign for governor, win or lose,” he wrote in a 2003 email to a second-grader in Texas who was working on a school project about famous American Catholics. “My wife is Catholic and we always went to Mass, so she was my principal motivation.”

He has also suggested that concerns about the Episcopal Church, which has moved steadily to the left on social issues and liturgical matters, played a role in his decision.

Mr. Bush’s second campaign for governor, in 1998, was characterized by
modulated language; he trumpeted a newfound compassion, and won.

“His campaign was still very conservative, but much more moderate in tone — clearly, he had a different perspective,” said Matthew T. Corrigan, a political scientist at the University of North Florida and the author of a biography of Mr. Bush.

The Times, Maher, and Salon each represent different parts of the progressive or liberal intelligentsia. One way of looking at their dispute is the emphasis each gives to the sincerity of Bush’s conversion. Maher raises the question indirectly that political calculation played a role. Salon reiterates the question but finds it somewhat wanting. The Times alludes to the possibility that political calculation played a role.

The Republican Party’s presidential debates begin this summer and the Iowa caucuses in January. If Bush escapes them and wins the party’s presidential nomination, look for more questions from progressives about the sincerity of his Catholic faith.