The Last Things: What’s Hell Like and What Will Happen to Us? 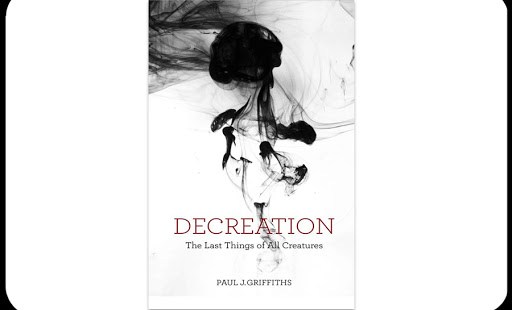 New book “Decreation” by Paul J. Griffith walks us through the end of time

“Decreation” at first sight is an odd word to use when speaking about the end of all things, come the consummation of time. But it makes you think. Most of us probably conceive of a mere transition at death, moving from earth to heaven, a smooth and effortless change of address, but we don’t give much consideration to anything after that. As Paul J. Griffiths’s formidable book, Decreation: The Last Things of All Creatures, of Last Things explains, there’s a lot to consider.

The word itself, decreation (borrowed from Simone Weil), can be taken in the poetic sense of emptying one’s self to God. In the sense of last things, it is God’s transcendent redemptive work in creation. It is a thing to be sought, longed for, a life filled with the divine until the self is subsumed within it. Decreation is not a reversal or undoing of creation. It is the completion of God’s creative purpose.

Griffiths—a theologian of the first order, chair of Catholic Theology at Duke Divinity School, and author of some ten books on philosophy and theology—uses decreation as a description of what God is doing and will do to overcome the present “devastation” of the world.

There’s another word—devastation—that will catch readers unawares. It is the state of life now experienced, after the fall of angels and humans. We live amid the devastation: life journeying toward God’s decreation. Griffiths is not speaking of human death alone. This book is about the last things of all things, as it will be wrought by God.

“The fall into sin,” as most of us use it, is a phrase much too small for Griffiths’s theological language. It does not describe the extent of or the consequent calamity of a world now held hostage to sin, death, and the devil, nor does it account for the first fall, of angels, which preceded our own. The urge to minimize the effect of our sin—the “can’t we all just get along?” tune—ignores the depths human perversity is capable of achieving.

But to call it what it is with a new vocabulary, call it something that grasps us and shakes us into comprehension, and we see it: devastation. Griffiths uses “world” interchangeably with “the devastation,” meaning "the damaged cosmos, the cosmos as it has become since the double fall, of angels and humans. The principle signs of the world’s devastation are death (of animate creatures), annihilation by destruction (of inaminate ones), pain and suffering (for animate creatures), and chaotic decay-toward-destruction (of inanimate ones). Traces of the cosmos’ surpassing beauty remain, some evident to human creatures and some not. But for the most part, the world appears to human creatures as it is: a charnel house, saturated in blood violently shed; an ensemble of inanimate creatures decaying toward extinction; a theatre of vice and cruelty."

The end of this devastation is the proper topic of the book. It is thorough, ranging from what happens to the angels, human flesh, plants and animals (more of this momentarily), the Church, and imagining of the nature of hell. He draws together numerous resources of the Church’s teaching from the Fathers on, including the Catechism of the Catholic Church.

And still, the possibility exists: “If heaven is the world healed” then “all plant and animal kinds, with all their individual members, should be present there, transfigured as inhabitants of the peaceable kingdom.”

Who should read it? Undoubtedly it will make its way into some Catholic seminary classrooms, but others will benefit, too. Informed amateur theologians as well as trained ones, readers who enjoy a rigorously thoughtful writer, and Christians seeking to hone a greater intellectual connection to their faith will find this a rewarding and stimulating book.

Russell E. Saltzman is a web columnist for First Things magazine. He lives in Kansas City, Missouri, and can be reached at russell.e.saltzman@gmail.com. His latest book is Speaking of the Dead.