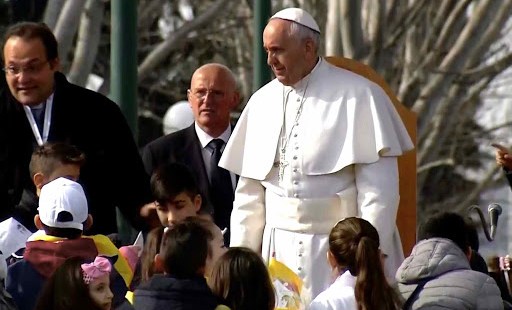 VATICAN CITY — Where there is no mercy there is no justice. Yet often times today the God’s people experience justice without mercy, Pope Francis said this morning in his daily homily at Santa Marta.

Rigorists who lead a double life

Commenting on the today’s Old Testament and Gospel Readings, Pope Francis spoke of three women and three judges: an innocent woman, i.e., Susanna; a sinner, i.e., the woman caught in adultery; and a poor widow in need. “All three, according to several of the Fathers of the Church, are allegorical figures of the Church: the holy Church, the sinful Church and the needy Church,” the Pope said.

He then observed: “The three judges are evil and corrupt.” In the first place there is the judgment of the scribes and pharisees who bring the woman caught in adultery to Jesus.  Their hearts, he said, had been corrupted by rigidity.

“They thought they were pure because they observed the law” (…) but they did not know mercy” he said. “The law says this, and you have to do this.”

“They weren’t saints, they were corrupt. Corrupt, because a rigidity of this kind can only go on in a double life and these men who were condemning these women were then turning around and secretly going after them for a little fun,” the Pope continued. “To use the adjective with which Jesus described them, they were hypocrites: they had a double life. Those who judge, let us think about within the Church — all three of the women are allegorical figures of the Church — those who judge the Church rigidly have a double life. With such rigidity one can’t breathe,” he said.

Pope Francis then looked at the two elders (judges) who sought to blackmail Susanna in order that she might give in to their demands despite her refusal. “They were vicious,” the Pope said, “they were corrupted by vice, in this case, by lust. And it’s said that, with the passing of time, the vice of lust before more ferocious and depraved,” he observed.

Finally, there is the judge who was challenged by the poor widow. This judge, Pope Francis said, “neither feared God nor man: nothing mattered to him, he only cared about himself”. He was "a businessman, a judge did business through the profession of judging.” He was corrupt on account of money and prestige, he said.

These judges the profiteer, the depraved and the rigid “didn’t know what the word mercy meant,” Pope Francis said.

“Corruption did not allow them to understand what mercy is, that one must be merciful. The Bible tells us that justice is to be found in mercy. The three women: the saint, the sinner and the needy, all allegorical figures who represent the Church, suffer for lack of mercy. And God’s people today can find themselves before ‘judges’ who lack mercy, both in the civil environment and in an ecclesiastical one. Where there is no mercy there is no justice.  When God’s people draw near asking for forgiveness, they often find themselves condemned by one of these judges”.

One of the most beautiful phrases in the Gospel: “Nor do I condemn you”

Coming across people “who exploit and make the most of them”; who “deprive their souls of oxygen, robbing them of hope” and who “who punish penitent sinners for the very sins they conceal within themselves”. “This,” the Pope said, “is called a lack of mercy”.