When Christians and Jews Make Sweet Music Together (Literally) 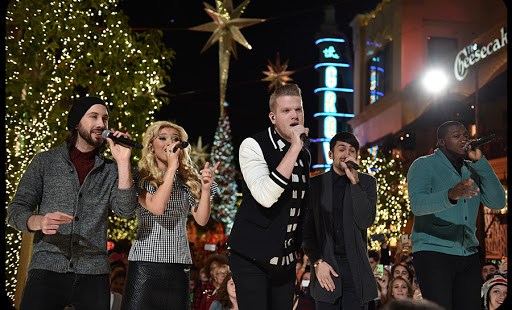 The marvels of chart-topping interfaith harmony

The separation of church and airwaves is an unwritten rule for most of the year.

But that changes during Christmas, when it becomes totally natural for the primarily secular airwaves to be full of popular songs that feature rather stunning, acutely religious lyrics.  All of a sudden, Jesus and God are literally in the air.

You can be at a coffee shop in a major city, and then, thanks to the ubiquity of Christmas tunes, all of a sudden, hot on the heels of Taylor Swift, you hear Frank Sinatra rhapsodizing about a “Silent night, Holy night,” Bing Crosby asking “What Child is this?,” and the cast of Glee answering with “it is the night of our dear Savior’s birth.”

In terms of hard-nosed business, explicitly Christmas entertainment makes sense. The Pew Research Center reports that 73% of American adults believe in the virgin birth, and therefore the divinity, of Jesus. So movies and songs celebrating it in December are, in the slightly unromantic sense of targeting key demos, simply giving people what they want.

And we sure do want it.

Late last year, a capella sensation Pentatonix did a haunting new version of Mark Lowry and Buddy Greene’s classic rumination on Mary’s motherhood, Mary, Did You Know?  The YouTube video has been viewed a total of 30.8 million times.

The track is from the Pentatonix album “That’s Christmas to Me,” which was #1 on Amazon’s list of overall Best-Sellers in music for 2014, edging out the Taylor Swift juggernaut.  And that’s #1 for the entire year, not just December.

The chart-topping ability of Jesus (and his birthday) is nothing new.*  Nor is it the most important or miraculous of His powers.  But there are facets of the Pentatonix Christmas album that are quite novel indeed.

The first is its unseasonable popularity.  Right now, with Christmas almost three months behind us, “That’s Christmas to Me” is holding the #44 slot on the Amazon list of best-selling albums in 2015.  It has 3,338 reviews – more than any of the other top 44 albums – and 73 of those reviews (which average 5 stars) were posted recently in March.  As for the Mary, Did You Know video, over 4 million of its views have happened between January and March of this year — 250,000 of them in just the past few days.

It seems as though music celebrating Mary and the debut of her newborn isn’t respecting its normal boundaries and staying put in December.

In a solo during the Mary song, Avi Kaplan, the band’s skilled baritone, voices the words “Mary, did you know that your baby boy would save our sons and daughters?” and “this child that you delivered will soon deliver you.”

These articles of Christian faith are being earnestly intoned by Mr. Kaplan, who is Jewish-American. He’s sharing his own talents and gifts, to enhance the gifts of the season – literally embodying the fact that the hope and grace of the Christmas event transcend religious barriers.

Avi Kaplan is in good company.  The godfather of this kind of gracious, chart-topping interfaith gesture is Irving Berlin.  Berlin, the proud American immigrant from a family of proud Russian Jews, famously composed and wrote White Christmas.

What’s noteworthy is that he didn’t write a hit called White Holiday.  He wrote a hit called White Christmas.  And it’s widely recognized as the #1 best-selling single of all time.  It bespeaks a compelling pan-religious ecumenism. The best kind of interfaith. In one way, it shows the ongoing power of the story of Jesus’ birth, drawing folks in, making many of us want to somehow be close to its general sense of renewal and hope.  It also shows the graciousness of spirit on the part of Mr. Berlin, to lend his talents to the celebration of another faith’s central mass.