The Conversion of “Miracle Man” and His Visions of Jesus, Mary, and Heaven 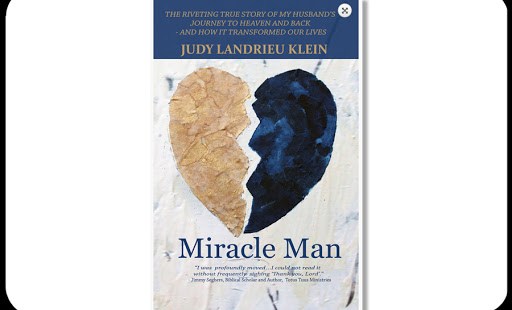 A story of transformation and renewal

Miracle Man is a memoir of conversions. The first is of the “Miracle Man” himself, Bernie Klein, and the other of his wife, Judy Landrieu Klein, the author. But the conversions, while moving, are unfortunately buried in the book. One could argue that faith conversions often happen amid the details and family stresses of day-to-day life.

The early parts of Miracle Man focus on the Klein family: Judy’s family history, her marriage to Bernie when she was twenty-two and he was forty, and their in-laws. Like most families, theirs is a tangle of warmth and tension, success and tragedy (suicide and drug addiction among the latter).

Judy Klein’s conversion was in 1988, but as the book goes on her husband’s illness seems to take her through a second conversion—a maturing of faith that can only be gained when, instead of snatching you from trouble, faith teaches you to walk through it instead. This aspect of the book comes late and could have been discussed sooner with much greater effect. As it is, the reader doesn’t have much opportunity to build resonance with or sympathy for Judy as the author and narrator. One wants her either to slow down in the beginning, or extend her reflections at the end. Tighter editing would have helped.

As for Bernie, here is one gregarious, larger-than-life husband and father, in Judy’s telling. His busy career as a consultant is slowed by chest pains, and then brought to a screeching halt by a heart attack a few days before Christmas 2008—the same day that their youngest daughter is in labor with her first child. There is obvious stress and chaos as Judy tries to manage two serious events on opposite ends of the emotional spectrum.

It gets worse. Bernie spends over two months in the hospital with failing health, moving in and out of a coma. When he is well enough, he insists that his wife write and publish his amazing visions of Jesus, heaven, the Immaculate Heart of Mary, and the state of his own heart.

The feelings coursing through the book are intense, no question, and the many moving ingredients in Judy’s life stirs lots of her memories. Yet the author distracts readers from the emotional intensity with flashbacks, many flashbacks, that break into the story narrative. As Judy’s daughter Gaby, for example, announces that she is having contractions, there is a page-long flashback. As they are parking the car, another page-long flashback interrupts the story. At the beginning of the next chapter there is another flashback and, yes, they still haven’t parked the car.

Still, there are moments of contemplation. Early in the ordeal, Judy admits, “Though I’m trying to learn that there is a God and it’s not me, the repeated lesson of surrendering my expectations about life has been a hard one, and I’ve cried bitter tears as the realization has sunk in that not only am I not in control of anything, I’m completely out of control most of the time … With drama and trauma all around me, I’d been thinking about throwing in the towel on this whole Christianity thing, because I certainly hadn’t signed up for this much suffering.”

Prolonged grieving is difficult. Perhaps Judy Klein wrote this book too early in her grief. Instead of giving us an insight to her feelings, she processes the stress of watching her husband’s illnesses with meticulous reports on his medical condition and the excruciating decisions around second opinions and extraordinary support she was receiving. But it’s all a little too clinical.

Readers with loved ones going through protracted illnesses no doubt will empathize with the wrenching medical ups and downs as the family gains, loses, regains and again loses hope Bernie’s recovery. Many believers will find Bernie’s enthusiastic visions of heaven intriguing and his conversion convincing. The book, though, takes a long and winding path to this short section. Nonetheless, we see in Judy’s writing our own messy, complicated lives when children, disjointed extended families, and prayer warrior friends, gather around during a crisis.

The book promises on the cover to tell the story of the “journey to heaven and back and how it transformed” their lives. Very late in the book, Judy encapsulates in a sentence that life’s bustle and push for affirmation are meaningless unless God is in the middle of it all. We could benefit from hearing the author discuss the transformation inspired by her husband’s revelations. Had she directed as much energy into that as she put into describing the social and family scene at the beginning, we would have learned more of the transformation promised on the book’s cover. As it is, things conclude on a deep note of grief, but no further change. Miracle Man, a story made for contemplation and renewal, has an unfinished feel to it.

Denise Rector is a distance-learning seminarian with Wartburg Lutheran Seminary, Dubuque, Iowa, and a parishioner of Atonement Lutheran Church in Overland Park, Kansas. She lives in Grandview, Missouri.