Will a Catholic Bishop Side with Hollywood Liberals or a Theology Teacher?

A high school theology teacher in New Jersey has been suspended for making “anti-gay” remarks on Facebook. Now the future of Patricia Jannuzzi is in doubt. Will her bishop side with her or Hollywood liberals?

The question is the heart of a new radio campaign to defend Jannuzzi and seek to rally support for her cause, according to mycentraljersey.com.  The Lepanto Institute, a Virginia-based non-profit, aired a second radio ad in the New York-New Jersey market after airing its first ad Friday, the news site reported:

"Call Bishop Bootkoski now," the announcer says in an ad scheduled to run during the Rush Limbaugh and Sean Hannity shows on WOR. "Ask him whose side he’s on: Catholics who defend our faith or Hollywood liberals who mock it."

Jannuzzi, a teacher at Immaculata High School in Somerville, was suspended with pay and benefits two weeks ago. Her bishop, Paul Bootkoski of the diocese of Metuchen, wrote that Jannuzzi’s now-deleted Facebook post was “disturbing and do not reflect the church’s teachings of acceptance.”

Placing private-school teachers on administrative leave is a common form of punishment that school district officials use to fire the employees, according to an official.  Has Bishop Paul Bootkoski made up his mind already? Has he terminated Jannuzzi?

According to mycentraljersey.com, Jannuzzi’s lawyer said the bishop did just that. Attorney David Oakley told the publication that lawyers for the diocese of Metuchen said Jannuzzi would be fired in effect by the summer:

"At every point in our discussions the diocesan lawyers told us repeatedly there was no way that Patricia Jannuzzi would ever come back to the Immaculata classroom under any possible scenario," Oakley told MyCentralJersey.com. "On Thursday by phone, the diocesan lawyers told me clearly and finally that Patricia Jannuzzi would be terminated as of the end of August, end of discussion."

In addition, Oakley released an email he sent Friday to a diocesan lawyer to confirm that the archdiocese will terminate Jannuzzi in August. He said he was writing to “confirm my understanding of your client’s decision with respect to the termination of Patti Jannuzzi. I am deeply sorry that we were unable to reach an agreement on terms for Patti’s reinstatement.”

The homepage of the diocese of Metuchen has not addressed Jannuzzi’s job status after the bishop released its statement on March 20.  But a diocesan spokeswoman released a statement to reporter Sergio Bichao of MyCentralJersey.com that contradicted Oakley’s assertions. She said that "decisions for all teaching positions for the 2015-2016 academic year are made later in the spring. We are baffled and disappointed that there has been a website soliciting funds that is filled with misinformation."

Jannuzzi is under fire for criticizing the gay-rights movement and defending Church teaching on the traditional family.  Greg Bennett, a former student at Immaculata and an actor on the reality-TV show “The Real Housewives of New Jersey,” criticized Jannuzzi’s Facebook post. Actress Susan Sarandon, Bennett’s aunt, supported him in a follow-up post on her Facebook account.See her post below: 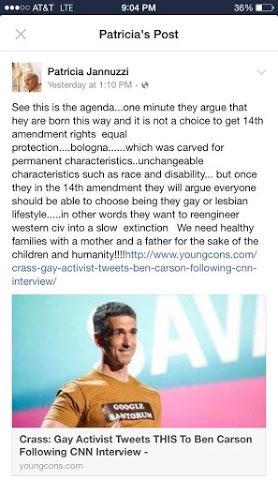