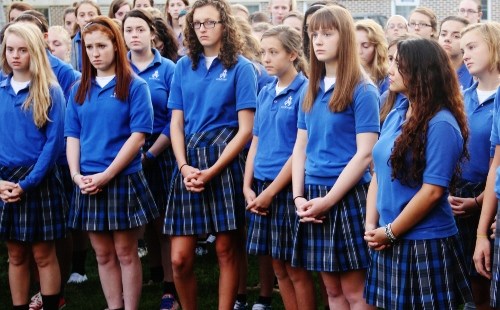 Was it the film’s dramatic nature or the content?

A Catholic religious-instruction teacher in Pennsylvania has stepped down after parents and a local talk-show radio host criticized her for showing a pro-life film to sixth graders.

According to the Wilkes-Barre Time Leader, the pastor of St. Monica Church in West Wyoming apologized last month for allowing the teacher to show her students To Be Born, a 2011 film short in which a young woman facing an unplanned pregnancy faces pressure from her boyfriend to abort. “Poor judgment on my part,” Father Leo McKernan said. The unnamed CCD teacher resigned, according to the paper.

Columnist Steve Corbett wrote that local parents objected to the film’s content. In response to the criticisms, a spokesman for the diocese of Scranton suggested that the film was too graphic for 11- and 12 year olds:

“The Diocese respects the concerns of parents regarding a film that was shown to a CCD class at St. Monica Parish. The intention to educate students about the dignity of all human life and the need for us to protect life at all stages is worthy. As efforts are made to accomplish this, the age and maturity level of those who receive the message must be considered. The Diocese has responded to the concerns expressed by parents and the circumstances in this particular case are being addressed. The Diocese will continue to offer educational programs that are appropriate for their intended audiences.”

One pro-life activist and artist told LifeSiteNews praised the film short but said parents should have been given the option of pulling their children from the CCD class:

Gary Cangemi, a local pro-life leader who draws life-affirming cartoons starring a comic strip character he calls Umbert the Unborn, said: “I saw the film in question and found it to be a touching, brilliantly made piece of pro-life commentary. As a creator of such commentary myself…I thought this film to be very appropriate for high school age and above…like a Hitchcock film you never actually see any carnage. The only blood you see is where it belongs, on the hands of the abortionist.”

However, he felt the film was “not appropriate for sixth graders,” and that the school bore the responsibility of “first informing parents and giving them the choice to opt their children out of the presentation.” But he called this “a minor infraction,” something that “had no business on the front page of the
Times Leader.”

According to its webpage, To Be Born was based on a story, “Letters from an Aborted Child,” that Fr Stephen Lesniewski of Chicago wrote. Fr Lesniewski said more than 500 unborn children have been saved as a result of the short story, which he turned into a CD.

Sprite Juice Studios turned the story into a film short, which lasts 14 minutes and 34 seconds. The video includes a nightmare sequence in which the pregnant woman allows a physician to use the dilation and curettage method of abortion while listening to her daughter tell her she loves her.

The showing of the film was brought to the newspaper’s attention by Steve Corbett, a columnist for the newspaper who doubles as a local talk show host. Corbett’s story not only quoted participants in the story but also criticized the film and defended abortion rights. "Even a quick look drives home the gore of what the movie’s director even admitted was an “exaggerated” portrayal of an overwhelmingly safe medical procedure," Corbett wrote.

The resignation of the CCD teacher happened before a New Jersey Catholic high-school teacher was suspended for making an impetuous defense of church teaching about traditional marriage and criticism of the gay-rights movement on her Facebook page. The incidents underlie the fears from some employees and volunteers at Catholic institutions that cultural progressives have conquered the wider culture and are making inroads into Catholic schools and churches.