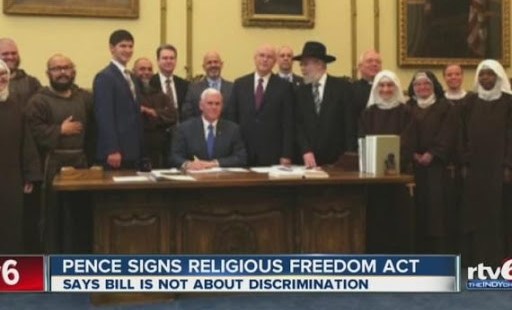 Gov. Mike Pence signed the bill behind closed doors with religious adherents by his side

Gay activists and corporate leaders assailed a new Indiana allows that extends legal protections to religious business owners and individuals and vowed to boycott the state, according to CNBC.

The law, signed by Pence on Thursday, allows businesses to use an owner’s faith as a reason to refuse service to customers, including same-sex married couples. The law risks setting off a business chill in the state, with money-making conferences and major corporations threatening to pull out.

Big corporations were among the loudest critics. Columbus, Indiana-based Cummins, the world’s largest diesel engine maker, opposed the new law in strong terms. "Cummins believes it’s bad for business and bad for Indiana and sends the message that the state is unwelcoming," a Cummins spokesman said. "We are a global company in a competitive environment and it could hinder our ability to attract and retain top talent."

Salesforce.com CEO Marc Benioff tweeted on Thursday about the decision in a series of comments that went viral and said the company would be forced to dramatically reduce its spending in the state. He called for any Salesforce employees and customers required to travel to the state for any work-related tasks to immediately cancel plans. He also called on the rest of the tech industry to take a stand against the Indiana government’s decision. Salesforce bought Indianapolis-based marketing software company ExactTarget in 2013. The new law permits religious businesses and individuals to refuse to serve gay couples to preserve their beliefs. Surrounded by religious leaders, including Franciscan priests and nuns, Republican Gov. Mike Pence said the bill would permit the religious to exercise their freedom of religious without fear of government coercion. The Indianapolis Stardescribed the story this way:

Senate Bill 101 prohibits state or local governments from substantially burdening a person’s ability to exercise their religion — unless the government can show that it has a compelling interest and that the action is the least-restrictive means of achieving it. It takes effect July 1.

Although the bill does not mention sexual orientation, opponents fear it could allow business owners to deny services to gays and lesbians for religious reasons.

Pence signed the bill during a private ceremony in his Statehouse office just before 10 a.m. Thursday. He was joined by supportive lawmakers, Franciscan monks and nuns, orthodox Jews, and some of the state’s most powerful lobbyists on conservative social issues.

The event was closed to the public and the press.

The bill signing makes Indiana the 20th state in the nation to adopt such legislation. It is modeled on the federal Religious Freedom Restoration Act, which President Bill Clinton signed in 1993.

But the timing of the measure has colored the debate in Indiana.

Social conservatives have pushed hard for such measures across the country following recent federal court rulings that legalized same-sex marriage in Indiana and other states.

Many in Indiana also see the legislation as a reaction to last year’s unsuccessful push to enshrine a same-sex marriage ban in the state’s constitution.

Three of the lobbyists who pushed hardest for last year’s gay marriage ban — Micah Clark of the American Family Association of Indiana, Curt Smith of the Indiana Family Institute and Eric Miller of Advance America — were among the 70 to 80 guests invited to the private bill signing.

"It is vitally important to protect religious freedom in Indiana," Miller said in a statement after the bill signing. "It was therefore important to pass Senate Bill 101 in 2015 in order to help protect churches, Christian businesses and individuals from those who want to punish them because of their Biblical beliefs!"

Socially conservative advocacy groups were joined by the Catholic Church, Indiana Right to Life, and many evangelical Christians in supporting the measure.

But Pence rejected suggestions that SB 101 was a consolation prize for conservative advocacy groups who failed to pass the gay marriage ban last year.

"I think that is inaccurate," he said. "This was overdue."