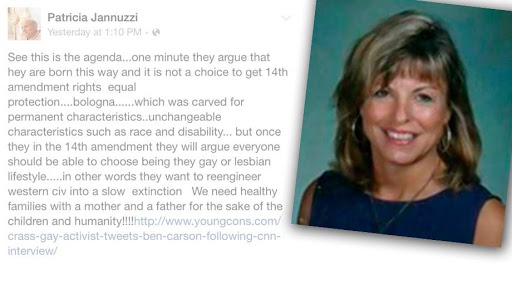 A theology teacher in New Jersey wrote a post on her Facebook page that criticized gay activists, attributed a malign motive to them, and defended Church teaching about traditional marriage. After progressives said the post was tantamount to hate speech, the Catholic high school that employs Patricia Jannuzzi suspended her. Then religious traditionalists campaigned to save her job. What does the incident say about the American Church’s attitude to gay rights and traditional marriage?

Over at CatholicCulture, founder Dr. Jeff Mirius said the episode shows that many Church leaders follow rather than lead popular opinion: instead of burying their heads in the Catechism and explaining Church teaching, they stick their fingers in the air to take the public’s temperature and defer to the majority. Mirius praises Jannuzzi’s post for distinguishing between gay activists and ordinary gays, but he criticizes her remarks for failing to acknowledge the challenges of same-sex attraction and attributing a malign motive to homosexual leaders (i.e. to “reengineer western civ into a slow distinction").


There is very little interest, even in wide swaths of the Catholic Church, in protecting Catholics who speak or act imprudently, in a way that ruffles our contemporary sexual feathers, from the monstrously disproportionate backlash which will otherwise tear them apart  …

Committed Catholics hold serious principles on marriage and family life which are both rejected by the majority of their fellow-citizens and actively shredded by our cultural elites. The resulting frustration means committed Catholics are going to speak unguardedly with some frequency. When they do, they will be pilloried. Moreover, sometimes even the most perfect expression of the truth will be insufficient to avoid the backlash.

This means that Catholic leaders—and especially those fathers we call bishops—need to be aware of the dreadful tightrope upon which their most faithful children must continually walk. Instead of disavowing their lack of balance—for it is hard to maintain balance while being constantly pushed—Church leaders ought to catch us when we fall, teach us more about keeping our balance, and set us even more firmly on our feet again.

Or let me put it another way: We do need teachers and commentators who can speak on challenging questions with balance, sensitivity and poise. But if they are to be even remotely credible, they must first be Catholics who are utterly unafraid to speak out frankly when they have much to lose. Recruitment and grooming must begin with those willing to speak clearly, not on popular issues like capital punishment, but on the issues where the larger and more powerful culture is seriously wrong.

For reporter Sergio Bichao of mycentralnewjersey.com, the episode shows that American Catholics are divided about gay rights and traditional marriage:

The Jannuzzi controversy sheds light on the division among Catholics on questions such as how to minister to gay and lesbian parishioners and the definition of marriage. When it comes to these issues, the 78 million Catholics comprising the nation’s largest Christian denomination are divided.

Despite longstanding church teachings that say homosexual acts are "disordered" and pronouncements by church prelates that marriage equality is the work of the devil, more than half of all U.S. Catholics support same-sex marriage and only 23 percent say homosexuality should be discouraged, according to a 2014 Pew Research Center survey.

Among adult millennials under age 30, tolerance or acceptance for the lesbian and gay community is even greater: Only 13 percent believe homosexuality should be discouraged while 75 percent support same-sex marriage — which is recognized by the federal government and legal in 36 states.