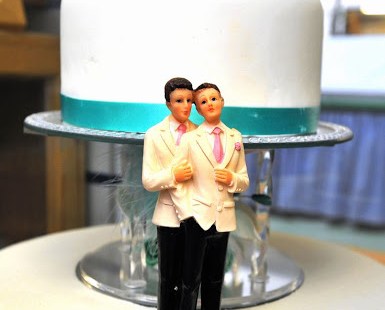 Republicans say they will add anti-discrimination clause, but will Christian bakers be forced to serve a gay wedding?

Indiana Republican leaders said they would add anti-discrimination language to a religious freedom bill, according to the Indianapolis Star:

Indiana Republicans said Thursday morning that they are presenting an addition to the controversial RFRA legislation that will make it clear no one "be able to discriminate against anyone at any time."

Senate President Pro Tem David Long, R-Fort Wayne, and House Speaker Brian Bosma, R-Indianapolis said at a press conference at the Statehouse that leaders will present the proposal to lawmakers at 9:30 a.m. after speaking with corporate and civic leadership this week.

"Hoosier hospitality had to be restored," Bosma said.

The leaders referenced the intense backlash that rained down on Indiana after Gov. Mike Pence signed the bill last week.

"It was never intended to discriminate against anyone," Long said. "That perception led to the national protests we’ve seemed"

The national media, many large businesses, and cultural progressives have assailed Indiana for the religious freedom restoration act, which Gov. Mike Pence signed into law last Thursday. They say that the law gives Indiana citizens a license to discriminate against lesbian, gay, bisexual, and transgendered people. Cultural conservatives say the law gives religious people a legal protection from the government forcing them to violate their beliefs. The law is set to take effect in July.

How the antidiscrimination language would change the law is unclear. As Garrett Epps of The Atlantic noted, the law gives a legal tool to for-profit companies in which the companies are sued for discrimination and the government is not a party. This protection would allow a baker, florist, or photographer to have legal standing if he or she was sued for refusing to service a gay wedding. Cultural conservatives point to a Christian photographer in New Mexico who was fined for refusing to take pictures of a gay wedding and a florist in Washington State who refused to provide services to a gay wedding.

The new Indiana statute also contains this odd language: “A person whose exercise of religion has been substantially burdened, or is likely to be substantially burdened, by a violation of this chapter may assert the violation or impending violation as a claim or defense in a judicial or administrative proceeding, regardless of whether the state or any other governmental entity is a party to the proceeding.” (My italics.) Neither the federal RFRA, nor 18 of the 19 state statutes cited by the Post, says anything like this; only the Texas RFRA, passed in 1999, contains similar language.

What these words mean is, first, that the Indiana statute explicitly recognizes that a for-profit corporation has “free exercise” rights matching those of individuals or churches. A lot of legal thinkers thought that idea was outlandish until last year’s decision in Burwell v. Hobby Lobby Stores, in which the Court’s five conservatives interpreted the federal RFRA to give some corporate employers a religious veto over their employees’ statutory right to contraceptive coverage.

Second, the Indiana statute explicitly makes a business’s “free exercise” right a defense against a private lawsuit by another person, rather than simply against actions brought by government. Why does this matter? Well, there’s a lot of evidence that the new wave of “religious freedom” legislation was impelled, at least in part, by a panic over a New Mexico state-court decision, Elane Photography v. Willock. In that case, a same-sex couple sued a professional photography studio that refused to photograph the couple’s wedding. New Mexico law bars discrimination in “public accommodations” on the basis of sexual orientation. The studio said that New Mexico’s RFRA nonetheless barred the suit; but the state’s Supreme Court held that the RFRA did not apply “because the government is not a party.”

Adding to the confusion is Indiana’s disparate treatment of openly gay citizens. On the one hand, Indiana gays were given the right to marry after the state’s ban on gay marriage was invalidated last October. On the other hand, gays are not a specially protected class of citizens that enjoy workplace protections.