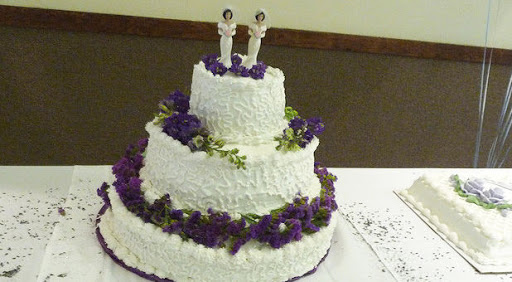 None
Cake for a lesbian couple.
Share
Print
Dale O’Leary - published on 04/03/15

Wedding artists have the right to say no

Suppose a group were to come an event planner, and ask them to organize a Circuit party where people engaged in sex with strangers and abused drugs, the planner would have every right to say “I can’t do that.” It wouldn’t matter if the participants were gay or straight.

The difference is clear if a client comes in and asks for what is already available, the merchant would have no cause not to sell it, but if a couple were to ask for something designed especially for them, the provider would be perfectly within his rights to say that he doesn’t create that type of product or service.

When a baker, photographer, florist or event planner is hired to do a wedding, they are intimately involved in the planning and have substantial contact with the couple. If they could not in good conscious congratulate a same-sex couple, they should have the right to tell such a couple that they could not put their heart into the project.

The bakers accused of discrimination were happy to make birthday cakes for all customers. The photographers were willing to take portraits and the florists to provide bouquets and arrangements whether those requesting them were gay or straight. They just didn’t want to use their artist skill to create a unique item that would celebrate something they didn’t believe in. Perhaps if, rather that guaranteeing religious freedom, the law had been written to guarantee freedom of artistic expression, there might have been less controversy.

Put the shoe on the other foot, should a Jewish bakery be forced to make a wedding cake for a Neo-Nazi couple who wanted it decorated with swastikas? Should a black florist be forced to decorate a wedding where the participants came in KKK robes?

Those, who throw accusations of bigotry and hate at anyone who refuses to accept the full gay agenda, argue that a refusal to provide the desired service hurts the couple’s feelings. This is true, but there is no constitutional right not to have your feelings hurt. Yet, this is precisely what the gay activists are demanding. They want to create a legal climate where everyone who disagrees with them is driven from the public square. Those who will not surrender will be fined, sent to re-education sessions, or even jailed.

This is not the first time people of faith have been persecuted, we just never thought it would happen here.


Dale O’Leary
is a freelance writer, author of The Gender Agenda: Redefining Equality
(which is available in Spanish and Italian) and One Man, One Woman.
She writes for numerous publications and has spoken around the world.