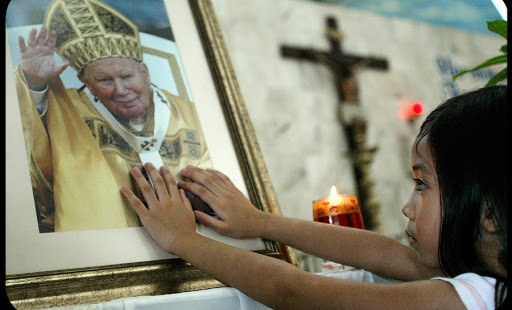 Remembering the man who changed the world

When we lived in England it was our custom every Easter Week to take part in Celebrate!— a Catholic family conference. The Spring of 2005 we travelled to the conference with heavy hearts. During the final weeks of Lent the world stood watching by the bedside of a great pope who was clearly entering the final stage of his earthly life.

After a long decline with Parkinson’s Disease, on February 24 Pope John Paul II was taken to the Agostina Gemelli Hospital with acute respiratory failure. The doctors performed a tracheotomy,. After an eighteen-day stay in the hospital, the doctors wanted to keep him there, but he insisted on returning to the Vatican.

The pope wanted to die at home—just a few hundred yards from the site of St Peter’s martyrdom and tomb. As he was transported back to the papal apartment the crowds watching across the world saw a frail and failing pope and knew that he could not go on much longer.

Nevertheless, on March 20 he appeared for the Palm Sunday liturgy but could barely hold a palm branch. On Good Friday he followed the traditional Way of the Cross at the Coliseum at home in front of the television. He was pictured in a purple stole clutching a cross. It was as if, in this final Holy Week of his life, he was walking with Christ in his own terminal suffering.

On Easter Day he made his final public appearance. Unable to speak, and clearly in distress, he gave the crowds his Easter blessing. His health continued to decline during the following week. On Saturday evening, at 8 p.m., the Mass for Divine Mercy Sunday was celebrated in his room, by Archbishop Stanislaw Dziwisz and a group of Polish priests. The pope received communion and the last rites of the church. Finally, later that evening, Cardinal Sandri announced to the crowds keeping vigil, “Dear brothers and sisters, at 9:37 p.m. our beloved Holy Father John Paul II returned to the House of the Father. Let us pray for him.”

For the next five days pilgrims flooded into Rome from around the world. Every means of transportation from Poland was packed. Hundreds of thousands filled St. Peter’s Square, standing silently in lines to pay their respects to the pope who had changed the world. His funeral on April 8 was thought to be the largest funeral in history. Heads of state joined with the tens of thousands in the square and millions more watching on television around the world.

In England our group of Catholics continued our celebration with a new solemnity and thanks for the life and ministry of Pope St John Paul II. He had not only changed the world, he had changed our world.

Our own journey to the Catholic faith was, in many ways, made possible by Pope John Paul. He was elected in 1978—the year I left the fundamentalism of my family and began a journey through the Anglican church to the Catholic faith. John Paul II was therefore the only pope I really knew. During that personal journey, whenever there was confusion and wrong decisions by my own Church of England, Pope John Paul II’s firm and clear teaching showed the way. The Catechism of the Catholic Church—his initiative—helped to bring us home. Time and again as we read the catechism we said, “This is not what I thought Catholicism was. This is the Christianity I have always believed!”

In our own personal struggles with moral or doctrinal issues John Paul provided not only clear teaching, but a positive and dynamic witness. He was there as a monumental global figure—not only as the leader of Catholics, but as the sole voice of global Christianity. He was also the voice of true humanity, morality, decency and gospel values for all people of goodwill. When he stood in solidarity with the people of his homeland against communism the whole world took notice and gave thanks that someone had the courage to stand up to tyranny.