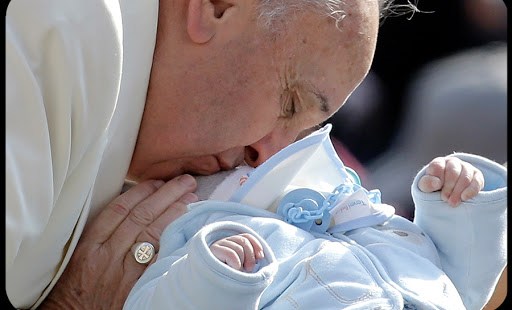 A journey home thanks to the Holy Father

My mom was raised in a big and very Catholic family. Bad things happened in that family. In my mom’s mind and more importantly, in her heart, it seemed that the church, religion, God, the whole works, had not been there to protect her and her siblings. All of that Catholicism seemed to my mom to be bound up with and even responsible for the harm that took place.

My mom raised me to ridicule and scorn religion, especially Christianity, more especially Catholicism, and most especially the pope. It broke my mom’s heart when I, at the age of 30, against all odds and contrary to anything she or I expected, became Catholic.

Now, for the first time in the 22 years since my conversion, she feels differently. She sends me text messages telling me the latest news about Pope Francis. Though her health will not permit it, she told me recently that she wishes she could go to Philadelphia with me in September to see the pope.

For the first time my mom sees my lifelong love for the poor, something I learned from her, as being central to my Catholic faith. My Catholicism makes sense to her in a way it never did before.

My mom understands that Pope Francis hasn’t changed any church teachings. But it makes a big difference to her when someone who says we should focus on the poor backs it up by riding around in a Ford Focus; when someone who upholds traditional teachings on marriage complements that by saying, “Who am I to judge”; when someone so clearly, palpably, obviously believes that the Gospel is “good news of a great joy for all the people.

My background includes not only anti-Catholicism, but also poverty, drug addiction, and homelessness, followed by many thousands of 12-step meetings, conversion and a great struggle to faithfully live out my conversion. These are some of the reasons I am always so drawn toward those who don’t feel as if they belong in the church. But at times I have felt as if my concern for and focus on those outside the walls of the church is a strange and foreign thing to my fellow Catholics. Pope Francis is changing that. All around me Catholics are getting excited at the notion that our faith can be more relevant to more people in more places and more ways than we ever hoped for. That’s a beautiful thing.

My mom is terminally ill. Currently, she and I are walking together along the last leg of her journey here on earth. As we go through this, drawing closer to each other, my mom is feeling more comfortable with the Catholicism that lies at the center of my being and therefore at the center of my love for her. And she is becoming more comfortable with the good that was there all along together with the wrongs in which she was raised as a child.

My mom still loves the old hymns that were played with great frequency in the home in which she grew up. She told me recently that although she’s not quite ready for them now, she wants those hymns to be played in the room with her when the end draws near. I’m not looking forward to losing my mom. But I am looking forward to listening to those hymns with her. And I’m grateful to Pope Francis for helping to make that possible.

Dave Sloan is leading a mission to Love and Serve with FRANCIS IN PHILLY during the papal visit to Philadelphia. Info at www.francisinphilly.net or davesloan@mail.com.​ This article was first published at The Georgia Bulletin and is reprinted here with permission from the author.