Those Catholic Kids Could Swear and Fight 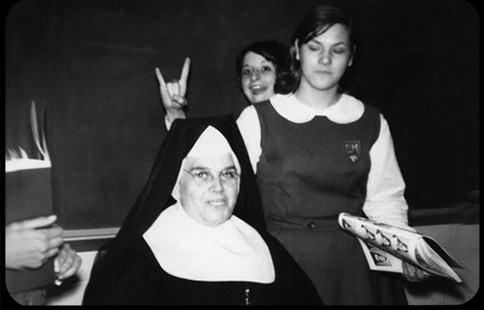 Those Catholic kids at the parochial school could string together swear words in a way almost no one in my public school could. They could produce them in mind-boggling numbers and loudly enough to be heard over a jet engine. Sometimes they produced them just before starting a fight, which they seemed happy to do, and at which they were rather good. They were like no one I knew.

I was the scorekeeper for our high school basketball team and going to games at the parochial school across the river was a little like going into combat. The players were always sportsmen, but some of the other kids and their parents were not. The number of really foul-mouthed and aggressive students and parents was probably small, but they drew such attention to themselves — and so many were genuinely scary people when angry — my colleagues and I didn’t notice the others. We were always relieved to get safely onto the bus and even more relieved when the bus got safely out of the parking lot.

This, some of the adults around me would say, is what Catholics are like. They aren’t like us, who rarely swore and never fought, at least in public. Theirs was an unenlightened culture. They did not share the genteel and civilized values of our community (a typical postcard New England college town). When we would let things go or talk things out, they resorted to verbal and even physical violence when things did not work out the way they wanted. The religion and the swearing and the fighting were all part of the same thing.

That was what I heard from secular adults. The religious adults I knew added another, sharper criticism. Some of these adults were classic mainline Protestants, others very conservative Evangelicals. Catholicism was essentially antinomian, though this was not a word they’d have known. One explained to me that this is how people act when they think they can get forgiveness just by going to a priest. A few with more knowledge explained that the Catholic view of grace let people feel they have God’s approval no matter they do, and that all they had to do was go to Mass. Others (always the Evangelicals) held against the Catholics as well that they drank and smoked and played bingo right in the church hall because their church let them lead such dissolute lives.

I’ve switched sides now. I’ll always be formed by my childhood in that town, but I’ve joined those kids from the parochial school across the river. They, and their children who might be yelling the same bad words at basketball games, are now my brothers and sisters. I share their religion, and I know it’s not the reason they acted so badly then because I know it’s not the reason I act badly now. Things look different from the inside.

Maybe their culture as expressed by their priests and parents allowed a rhetorical range theprim academic culture in which I lived did not, and maybe it did not judge a fight over a close game so bad as did our culture — the culture of people who didn’t fight because they didn’t like getting hit, if we’re being honest. Sure. Religions are incarnated in particular people in particular cultures, and each will go wrong in some characteristic ways but also go right in others. Catholicism is always pushing against a culture’s failings and pointing its people to the ideal.

The adults who so easily dismissed Catholicism because the parochial school kids misbehaved were just snobs. They didn’t swear at kids from another school and throw punches in the parking lot, and that, they thought, made them better. They were only doing what people like them did. Being a peaceful academic isn’t really virtuous when you and everyone around you is naturally a peaceful academic and rewarded for being that kind of person.