Kenyan Students Asked for Prayers Before al Shabaab Shot Them 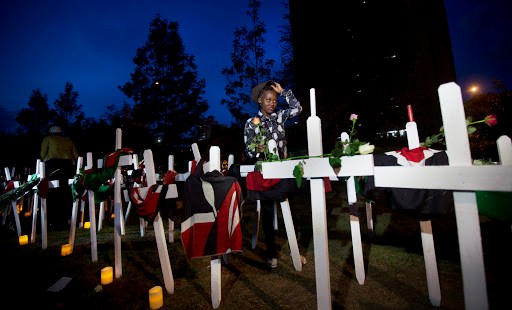 There are no cows in the Maina household. And now, there is a far greater emptiness.

"I sold them to pay his school fees,” Stanley Maina Waiharo told the Guardian. It was the kind of sacrifice that’s accompanied by the expectation that something will come of it. A willing sacrifice.

John was the first person in his wider family to get a college education, he said.

“This was a boy who, when everyone else was out there playing, he was always indoors studying. He took his studies very seriously," Maina told the newspaper. "We had so much hope in him.”

Details are emerging of the lives snuffed out in the al Shabaab attack at Garissa University College last Thursday—at the beginning of the Easter Triduum. Attackers killed 147 persons, mostly students. The Islamist terrorist group targeted Christians, attacking the campus in the early morning and storming into a prayer service.

Many of the victims were prayerful and self-sacrificing. Maina reportedly escaped and could have saved his life, but went back to rescue his girlfriend. That’s when he was shot.

Students also displayed an attitude of abandoning everything to providence in the midst of the attack. "At this point, we leave everything to God," was the last text Ayub Njau Kimotho, 21, sent to his brother. A second-year Business Administration student, Kimotho’s whereabouts are still not known.

“He is a prayerful man and had left his room with one of his roommates to go for morning prayers,” his brother, Daniel Chege, told the Daily Nation.

Elizabeth Namarome Musinai, 20, called home and frantically told her father, "There are gunshots everywhere! Tell Mum to pray for me — I don’t know if I will survive."

The call at dawn was one of several her family received Thursday as the drama unfolded at the college. As Yahoo News told it, at about 1pm, a man got on the line to demand that Kenyan President Uhuru Kenyatta be contacted within two minutes and told to remove troops from neighboring Somalia, where they are fighting al-Shabab extremists.


He phoned back promptly. When told the president had not been contacted, he said, "I am going to kill your daughter." Three gunshots followed, and he hung up. When Elizabeth’s father, Fred Kaskon Musinai, called the man back, he said he was told: "She is now with her God."

Likewise, Milcah Ruto, who was waiting to identify her daughter Judy Chepkemboi, recounted the final conversation she had with her.

“My daughter was able to call me on that fateful day and stated that they had been attacked by the Al Shabaab," Ruto told Capital News, a Kenyan outlet. "‘I am under the bed and I need your prayers since we are in danger.’ That was the last conversation I had with her.”

Cardinal John Njue of Nairobi, chairman of the Kenya Conference of Catholic Bishops, issued a letter of solidarity saying, "The Catholic Church commits to activate the parish networks for our Christian faithful to lend their support and prayers."

He called on religious leaders to “desist from teaching and preaching hatred for people who do not subscribe to their religion and doctrines, and recognize that everybody believes in a Supreme Being.”