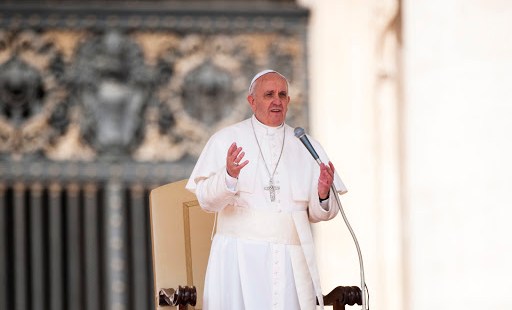 Will the West protect persecuted Christians or play Pontius Pilate?

VATICAN CITY — Persecuted Christians were a central focus of Pope Francis’ preaching during Holy Week and Easter this year. Official statements came from the Vatican no less than 7 times — the biblical number of perfection or completion.

References began with Pope Francis on Palm Sunday describing these “martyrs of our own time” as “a cloud of witnesses”.

The theme was later taken up by Fr. Raniero Cantalamessa, OFM, Preacher of the Papal Household, who on Good Friday declared that “our institutions in the West risk being Pilates who wash our hands” if they remain indifferent to the killing of Christians by Islamic jihadists.

Francis would then return to the subject on Easter Monday (the second day of the Easter Octave), urging the international community not to stand by “mute and motionless” as believers, especially in Africa and the Middle East, are “persecuted, exiled, killed, and beheaded only for being Christians.”

“The blood of the martyrs is the seed of Christians,” the North African second century theologian Tertullian triumphantly and paradoxically wrote in closing his Apology, the famous work in which he defends Christianity and demands legal toleration of Christians in the Roman Empire.

Yet as the world sees Boko Haram pledge allegiance to ISIS, and voices increasingly warn of a global link among jihadists, Pope Francis is urging the international community not to play the role of Pontius Pilate on the world stage and wash its hands in “complicit silence” as Christ’s mystical body is crucified.

Here below we publish the 7 references to persecuted Christians issued by the Vatican since Palm Sunday.

2. Telegram sent by the Secretary of State of the Holy See, Cardinal Pietro Parolin, on behalf of Pope Francis to His Eminence Cardinal John Niue, President of the Kenyan Conference of Catholic Bishops in Nairobi on Good Friday, April 3, 2015

Deeply saddened by the immense and tragic loss of life caused by the recent attack on the Garissa University College, the Holy Father sends assurances of his prayers and spiritual closeness to the families of the victims and to all Kenyans at this painful time. He commends the souls of the deceased to the infinite mercy of Almighty God, and he prays that all who mourn them will be comforted in their loss. In union with all people of good will throughout the world, His Holiness condemns this act of senseless brutality and prays for a change of heart among its perpetrators. He calls upon all those in authority to redouble their efforts to work with all men and women in Kenya to bring an end to such violence and to hasten the dawn of a new era of brotherhood, justice and peace.

Christians are of course not the only victims of homicidal violence in the world, but we cannot ignore the fact that in many countries they are the most frequently intended victims. The last news was yesterday: 147 Christians killed by the Islamic jihadists from Somalia, in a university campus in Kenya. Those who are concerned about the good reputation of their religion cannot remain indifferent in front of all that. Jesus said to his disciples one day, “The hour is coming when whoever kills you will think he is offering service to God” (Jn 16:2). Perhaps never before have these words found such precise fulfillment as they do today.