Skateboarding Songwriter Josh Garrels Is on Fire with Faith 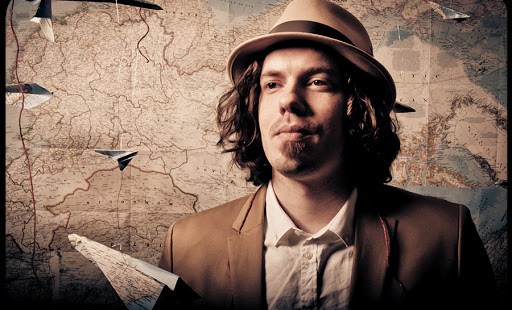 His joyful new album “Home” is a labor of love

In 2011, songwriter Josh Garrels finally got the music world’s attention – and it was, appropriately, a free gift that changed everything.

Love & War & the Sea In Between was a classically romantic and emotionally haunting record of one wayfarer’s quest for meaning. Every song, from “Sailor’s Waltz” to “Beyond the Blue,” smelled of the salty ocean air – but for this skateboarding, “globe-trotting minstrel,” the weary miles were as much interior as exterior. Garrels’ raw, unfiltered falsetto plumbed those hidden depths of the soul we can only glimpse, where our greatest hopes and desires lay battered by our worst fears. “I’m holding on to the hope that one day this could be made right,” he sings on the heart-breaking “Ulysses.” “Cause I’ve been shipwrecked, and left for dead…”

A lot of names come to mind when listening to Garrels’ music – Ray LaMontange, Bon Iver, even bygone 90s hip hop like the Fugees – but the truth is, he has an unmistakable style that’s all his own: part folk, part soul, and layers upon layers of artful instrumentation. “I write, produce, manufacture and distribute all my own work,” he says in an interview with the Huffington Post. “So I own all the rights, which in turn gives me the right to give away as much as I’d like.” In 2011, he decided to do just that, offering Love & War as a gift to his fans for a year.

Garrels’ whole approach to making and releasing music – one focused on smallness (his one-man label is called “Small Voice”), craftsmanship, and the cultivation of a direct connection with fans – attracted Mason Jar Music, a music collective out of Brooklyn devoted to “preserving analog principles in a digital age.” That collaboration led to The Sea In Between a few years later, a life-affirming documentary about a group of young wanderers brought together by the power of live music.

The album and documentary caught the attention of Billboard, NPR, NBC, and countless other major media outlets. But it wasn’t just Garrels’ quality music and his unique approach to releasing it that got their attention; it was also his inspiration.


The pathos and beauty of Garrels’ music is a function of his artistry – good music is good music, and he knows how to make it – but he is, without a doubt, a man on fire with faith. An unwavering belief in sin, sacrifice, and redemption are the beating heart of his every song, not as the shrink-wrapped transmission of an explicit message, but as the genuine expression of a lived reality, of a man finding God incarnate in all things – even pain. “I’ve spent a fair amount of time in low, melancholy places of borderline depression,” he admits. “Yet, I’m convinced that suffering and sorrow are often the midwives to the greatest joys and victories.”

His brand new album Home – once again a free download with an option to tip – is proof of that. In an extended album trailer, Garrels talks about anxieties and fears that plagued him as he wrote and recorded it in a new studio he built behind his Portland home. “I had to stop working on it for like three or four weeks and get on my hands and needs,” he admits. “My motor skills in my hands didn’t feel like they were working right, like my vision almost didn’t feel like it was working right. I felt like I was hyperventilating…”

The joyful Home is the prize of all that labor pain. The first two tracks, the atmospheric “Born Again” and the breezy “Colors,” offer a stripped-down, soulful sound that draws the drama of the last album to a close: Ulysses has returned safely to Ithaca; the prodigal son has blazed back into his father’s home; and the feasting and storytelling has faded into the crackling of the firelight. “Let all the creatures sing praises over everything,” he cries out on “Colors” – and you can’t help but join him. Where Love & War was a story of homesickness, Home enters into the love and joy of the homecoming.