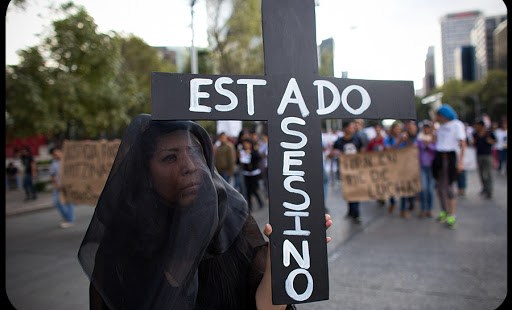 Pope Francis was right about a diabolical presence to our south

When Pope Francis, in an interview with Televisa last March, spoke about the devil attacking Mexico in a special way due to the presence of Our Lady of Guadalupe in the land of the Aztecs, he knew what he was talking about. The evil that has taken control of the country is inconceivable — or it is only conceivable if the devil is present in many Mexican hearts and minds.

In fact, a recent report from the office of the Attorney General of the Republic (PGR) of Mexico revealed that, of the 601 bodies found between December 1, 2006, and February 28, 2015, in 174 secret mass graves spread across the length and breadth of the country, 80 percent have not yet been identified.

The PGR’s report indicated that the sex of 342 of the 601 bodies found has been determined: 302 were men and 40 were women. The status of the rest is "not able to be determined, in process and/or undetermined." That is to say, the bodies have been so badly damaged that it is impossible even to determine to what sex they belonged in life.

The report was obtained by the newspaper El Universal by means of the new Transparency Law, which obliges Mexican authorities to give information to organizations or individuals who request it. In the report, the AGR indicated that not all the cases are documented "because some states do not work in coordination" with the Attorney General’s office.

According to official numbers, 20 thousand people have disappeared in eight years.

Nearly 50 percent of those people, that is to say, slightly less than thousand human beings, "vanished" from the map between 2012 and 2014 – the first two years of the current government headed up by the Institutional Revolutionary Party (PRI), that based a large part of its campaign propaganda for the presidential elections of 2012 precisely on the subject of security.

In 2011, during the presidency of Felipe Calderón of the National Action Party (PAN), 207 bodies were found. The graves were found in 16 of the 32 Mexican states, and 93 of them were discovered in 2013 and 2014. Of the total found between 2007 and 2015, Guerrero, in the Mexican south east, was at the top of the list of states with the greatest number of hidden mass graves: 79 graves and 199 bodies.

It should be noted that it was in Guerrero, specifically in the town of Iguala, that the crisis exploded (September 26, 2014) with the disappearance of 43 college students studying to be teachers at the Isidro Burgos School of Teaching of Ayotzinapa. This crisis has catapulted Mexico into the headlines of the world press, in the area of forced disappearances and the impunity with which the guilty parties participate in public life.

After Guerrero, the State of Jalisco (east) took second place; there, during the period from November, 2013, to January, 2014, 37 graves and 75 bodies were found. In Tamaulipas, in the northeastern part of the country, authorities have found 15 burial locations and 125 bodies since 2007, of which 120 were found in the municipality of San Fernando in 2011. Practically all of them were killed by the criminal organization "Los Zetas" and all of them were of Central American origin.

Truly, the country with the second greatest number of Catholics in the world has been attacked by the devil. Pope Francis was right.