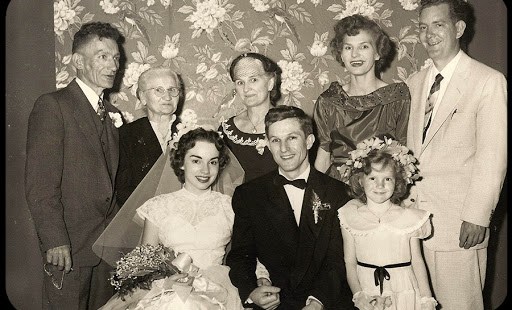 For years now, I’ve had an interested in World War II. I especially love reading first hand accounts of battle from the heroic and courageous men who fought in this war, such as those contained in books by Marcus Brotherton and Stephen Ambrose.

But stories of valor aside, I’m always entertained by how simply these war veterans viewed dating and marriage. The story of how they met their wives, contained in their biographical sketches, usually goes something like this:

“When I got home from my tour of duty, I was at an officers dance and saw Betty. She was the prettiest gal in the room. I told my buddy, ‘I’m going to marry that girl,’ and I asked her to dance. We’ve been married 55 years this year.”

In short, these young men came home from the war ready to get married and start a family. There wasn’t any thought of hooking up, or of dating on and off till their mid thirties, or of living in their parents basement until they landed a cushy job. No, they were more than ready for the responsibility of marriage and family. And they went looking for a wife, not a girlfriend.

We could all learn a thing or two from the men of the “greatest generation,” especially the importance of dating intentionally.

If there’s one thing we modern men seem to struggle with, it’s indecisiveness. We just can’t seem to figure out what we want. So rather than setting a goal, like marriage, and pursuing it with gusto, we meander around, taking our time, waiting for some undetermined sign to reveal to us how we should proceed.

We find a girl we like and date her indefinitely. We might even get serious and talk about marriage, but we are afraid to commit. We’d rather play it safe and enjoy the benefits of emotional intimacy without any of the risk of a formal engagement.

But I can’t encourage you strongly enough—if you’ve discerned that your vocation is marriage, date to marry. Don’t look for a girlfriend, look for a wife.

Why do I say so? Well, there are several problems with dating without a clear goal of marriage. The first is that its unfair to your girlfriend. Women are much more likely to want clear commitment. While this isn’t always the case, it’s a pretty safe bet. If you’ve been dating for a while, your shared emotions are growing intense, you’re talking about children, and yet you show no sign of a proposal, your girlfriend is going to get impatient. And I would say rightly so. If you have no intention of marrying her, you have no business leading her on. But if you do plan to marry her, well, have a clear plan and make it official.

Second, the longer you date someone, and the more emotionally heated your relationship grows, the more opportunity you create for temptation to sexual sin. Now, the world has no problem with this, and the vast majority of couples engage in sexual activity before marriage. But as Catholics, we know better. It is not worth endangering your immortal soul, as well as that of your girlfriend, just because you don’t feel ready for marriage. Get engaged and have a short engagement if you must, but whatever you do, realize that the longer you wait, the harder it will be to stay chaste.

Finally, there is the issue of emotional intimacy. It is irresponsible, and I would say borderline sinful, to become intensely emotionally involved with a number of women you have no intention of marrying. Serial breakups, similar to serial hookups, can leave lasting emotional wounds for both parties, whether or not your realize it immediately.

While I believe it is important to date intentionally, I fully realize that you may not marry the first woman you date. That’s fine, but you should at least enter relationships with the thought of marriage in the back of your mind and proceed accordingly. If you don’t think the woman you are dating is marriage material, you need to end the relationship, no matter how much fun you have together. That’s the only fair and gentlemanly thing to do.

The point is, marriage is a sacrament and dating is not. Dating is simply a discernment process. You should always be prayerfully asking if this is the woman God wants you to marry. If you already know she’s the one, so much the better. Once it has become clear that this is the companion you are meant to be with, don’t waste time. Pursue marriage. Make it happen. Yes, it might be scary, yes it might be a leap of faith, but be decisive and take action.

Sam Guzman is the founder and editor of the Catholic Gentleman where this article was originally published. It is reprinted here with permission.