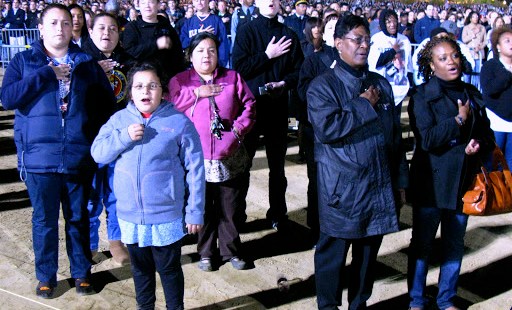 Proponents of the inclusion of “Under God” in the Pledge of Allegiance are celebrating a victory today as an organization that fights to remove those words decided not to pursue a case in the State of New Jersey.

The American Humanist Association has "thrown in the towel," in the words of the Becket Fund for Religious Liberty, which was defending the inclusion of "under God."

“I’m so grateful to know that I will be able to continue reciting the Pledge in peace,” said Samantha Jones, a senior at Highland Regional High School in Blackwood, N.J. “Ever since I was little, I’ve recited the Pledge of Allegiance because it sums up the values that make our country great. The phrase ‘under God’ protects all Americans—including atheists—because it reminds the government that it can’t take away basic human rights because it didn’t create them.”

That's not the way the AHA sees it, of course. The phrase “one nation under God” wasn’t part of the original Pledge of Allegiance, the organization points out on its website. "Those two words were added to the Pledge in 1954, when the country was in the grip of McCarthyism and communist witch-hunt hysteria. Before 1954, the Pledge affirmed that we were one nation indivisible, with liberty and justice for all.' Indivisible means we can rise above our differences, religious or otherwise. Liberty means the right to act and speak freely no matter what one’s faith or philosophy may be. And Justice, of course, means equal rights for all, regardless of whether or not we believe in a deity. … Now the Pledge is twisted, with divisive religious language that implies true patriots must be believers."

But if the AHA is having bad days in court—this is the second time in two years they have lost this cause at the state level, the Becket Fund points out—the activist atheist group is continuing to encourage students to boycott the Pledge recitation if it includes the offending words.

"Whether you are religious or not, you can make a statement for true inclusiveness. Support liberty and justice for all, and support indivisibility. Stand up for America by sitting down during the Pledge of Allegiance boycott until the inclusive version is restored," the organization says on its website.

Diana Verm, legal counsel at the Becket Fund, expressed agreement with the AHA's right to protest. “The Court was right that the Pledge doesn’t exclude anyone, but dissenters have the right to sit it out. That’s how we’ve always dealt with disagreements in our society.”

But Verm said it is "crucial for brave citizens like Samantha to stand up for their rights in court—sometimes all it takes to stop a bully is for one person to stand up."

Samantha's case began when the AHA filed a suit to stop school systems from allowing students to repeat the phrase “under God” as part of the Pledge, said Becket Fund spokeswoman Melinda Skea. "Samantha’s family stepped up to push back against this and the Becket Fund took their case," Skea said. "It wasn’t that Samantha was the only one who stood up in class, it was that she was the only one who stood up to protect it legally. She is an amazing young woman."

This is the fifth time in a row that the Becket Fund has successfully defended the Pledge of Allegiance.